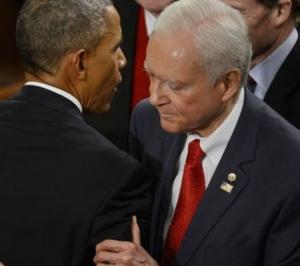 Utah’s Senator Orrin Hatch sponsored and introduced S.995, Trade Promotion Authority, on April 16, 2015. The bill has been in the Senate Committee on Finance from which it was ordered out favorably to the Senate floor on April 22, 2015. Like Obamacare (before it passed) and the FCC internet take over, the text is not yet available to read and we will most likely have to pass it “to know what is inside it”.

Like other “Trade Promotion Authority” legislation, this would give President Obama the authority to enter into agreements with foreign nations WITHOUT Congressional approval.

Trade deals sold as “free trade” over the last fifty years have been anything but “free”.  For example, NAFTA created an unelected and unaccountable tribunal with even more power than the U.S. Supreme Court, with any appeals to this tribunal going to the UN international court (New York Times, April 18, 2004). NAFTA tribunals have already over ruled many U.S. laws.

American legal experts have expressed their concern as well saying,

“This is the biggest threat to United States Judicial Independence that no one has heard of and even fewer people understand.”– John D. Echeverria, Law Professor, Georgetown University

“It’s rather shocking that the highest courts of the state and Federal Governments could have their judgements circumvented by these tribunals.” – Chief Justice Ronald M. George,California Supreme Court

Advocates of these independence destroying agreements also admit that these measures are not merely about trade, but about creating a “New World Order”,

“It (NAFTA) will represent the most creative step toward a New World Order taken by any group of countries since the end of the Cold War. …It is not a conventional trade agreement but the architecture of a New International System.” – Henry Kissenger, The Los Angeles Times, July 18, 1993

For Senator Hatch to introduce legislation giving President Obama more power to trample our Constitution and create political unions, depriving us of the independence we celebrate every July, is beyond wrong headed and borders on treason. Click here and tell Senator Hatch to stop supporting giving President Obama more power to turn American sovereignty and independence over to un-elected bureaucrats.

For more information on the dangers of Trade Promotion Authority, this video explains in depth the dangers in going around the Constitution and giving the President complete authority over trade agreements.