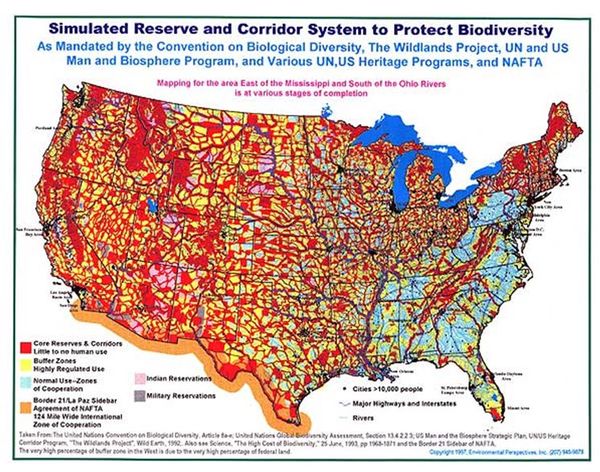 Defending Utah has been reporting on the Utah Transfer of Public Lands Act scheme and the fact that it is an Agenda 21 trojan horse for over a year now.  Since we started reporting on the connection, some board members of the American Lands Council have denied it, but when pressed for specifics, they are now admitting parts of what we have said all along, while avoiding talking about the rest.

In 2013 the Utah state legislature passed HJR11, which put Utah on record opposing the Agenda 21 program and its attack on property rights, including wilderness areas and sustainable development.

What is “sustainable development”?  One of the authors of Agenda 21, Maurice Stong, said, “meat intake, consumption of large amounts of frozen and convenience foods, use of fossil fuels, appliances, home and work place air conditioning, and suburban housing are not sustainable.”

Utah’s Transfer of Public Lands Act claims to be part of a process to take Utah’s lands back. The act created a “Constitutional Defense Council” (think Orwellian, “Freedom is slavery” “war is peace”) for the public purpose of working to transfer lands back to Utah.  However, the facts show the commission called for increased funding of Agenda 21 organizations such as the LeRay McAllister Critical Land Conservation Fund, gives control of land to radical environmental groups, and further designates land to be made off limits to humans, just as Agenda 21 calls for.

A NEW GOVERNMENT MORE POWERFUL THAN CITIES OR STATES

Further expansion of the Lands Transfer Act and Agenda 21 can be found in HB132 (2015) Interstate Compact on Transfer of Public Lands. This is the bill that creates the new regional government requiring, “Each member and associate member state agrees to perform and comply in accordance with the terms of membership of this compact“.

The American Lands Council (which receives the bulk of its funding through your taxes) now admits to this. Their admissions all started about a year ago on the American Lands Council YouTube video called “What’s Wrong with Wilderness?”. In response to the video a commenter, Bliss Tew, asks the question, “And yet HB48 (Lands Transfer Act) appears to keep the wilderness designations in Utah” to which Becky Ivory responded, “It was a necessary political component of the bill, but you are absolutely right.”

Fast forward to April 27th of this year (2015) and Defending Utah’s appearance on Bryan Hyde’s HD Radio Show where we further documented that the Transfer of Public Lands Act implements Agenda 21.  Washington County Commissioner (the county seat is an official member and sponsor of Agenda 21 through ICLEI), Alan Gardener,  called in furious that we would dare document the Agenda 21 aspects of Utah’s Transfer of Public Lands Act.  Defending Utah has no interest in who is right, only in WHAT is right, so we offered (and the offer is still out there) for him to refute the evidence we provide with a promise of retraction with an apology if he could show us where we were wrong.  However, when Commissioner Gardner was given time to dig into it and prepare his rebuttal, he ignored the topic completely.

Commissioner Gardner wanted equal time to “rebut” Defending Utah’s claims and the following day, he was given that opportunity. In the interview, Commissioner Gardner said he read our articles, but then he never addressed the content in our articles.  The show host, Bryan Hyde, even tried to get him back to the issue, and Commissioner Gardner continued to dodge the fact that Agenda 21 is in the Utah Transfer of Public Lands Act and the commission reports that followed. Bryan asked

“did you do any looking into those concerns about how this could potentially open the door for provisions for Agenda 21 to be implemented?”

After a pause, Commissioner Gardner said “No” and then immediately changed the subject, AGAIN.

In the same interview Kane County commissioner, Doug Heaton, called in. We will give him credit, because unlike Commissioner Gardner, Commissioner Heaton addressed the issue and fully admitted to the Agenda 21 aspects saying,

“You got to do what can get done politically”

Further in the interview, instead of addressing the facts of the bill, commissioner Heaton accused me of “torpedoing” the American Lands Council because of some ideological purity that made me unwilling to compromise “like those on the left”. This type of straw man argument, that one has to be in favor of the destruction of some rights to be “reasonable”, is what is leading more and more people to disengage in the process and perhaps that is by design.  However, it won’t work in silencing Defending Utah’s efforts to expose corruption and Trojan horse legislation.

Frankly, it is ridiculous to claim they had to put Agenda 21 in the bill to get it to pass. Utah is on record as opposing Agenda 21.  Additionally, if they are serious, who are those legislators that would not vote for it if it didn’t have Agenda 21 in it?  Let’s get the names!  Who forced you to turn over land to radical environmentalists?  Who forced you to increase funding for the Agenda 21 organizations? Who forced you to turn over legislative control to a regional unelected government? Why did the Constitutional Defense Council (using $1.8 MILLION tax payer dollars) “have” to put in aspects of Agenda 21 AFTER the bill had already passed? Let’s expose them so the people of Utah can really have their lands back… if you’re serious.

Defending Utah has been exposing the threat to liberty that the Transfer of Public Lands Act poses, and now they have been forced to admit it. No matter what kind of attacks they attempt to throw at us, and no matter how they try to smear us in the future, you will know what their goal is and that they are not doing it ignorantly.

In the meantime, Ken and Becky continue to double and triple dip out of tax payer dollars to fund their Agenda 21 trojan horse.