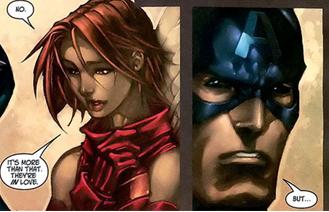 Saying that government recognition of same-sex relationships will lead to all kinds of other depravity, like say Incest, is something only the looniest of “right wingers” would ever try and claim. I mean, no one would support societal acceptance of sexual relations between brothers and sisters or between children and parents, right?  Right!?  That’s just religious craziness to try and increase the “ick” factor with gay sex. Right!?

Interestingly enough we know from the confessions of gay sex rights advocates that they have a hidden agenda behind the stories they tell to get their agenda through.

There are people advocating for the normalizing of incest, and these aren’t “fringe” voices either, unless you call the company with the biggest grossing films of 2015 “fringe”. In 2002 Marvel Comics published a well selling series based on the popular “Avengers” characters called “The Ultimates”.

In this series Captain America was treated as a backwards thinking person from the 1940’s that didn’t understand the “sophistication” of accepting the incestuous “lifestyle”.

Here we have The Wasp explaining incest like it’s the most normal thing to do in the 21st century.

The Wasp: Its What happens when your 1944 brain can’t process present-day anything… You don’t get it, Mister Rogers, do you? They love each other.

Captain America: Of course they do.  They’re brother and sister.

This isn’t some freak one-time occurrence, it was actually the running story line throughout the series with other issues of the top selling comic explaining that the character Quicksilver is attracted to his sister because she reminds him of his mother.

At one time, sodomy was illegal and considered as much a mental illness as incest is today. Through a consistent media normalization campaign, same-sex relationships were transformed from being seen as a danger to society that cause real physical and mental harm to its adherents, into something that is celebrated as courageous and deserving of celebration, science be damned.

With Salt Lake having a larger gay population than even New York or Denver, it is important for those trying to preserve Utah’s unique culture to understand the lies and manipulations being used to get them to support activities that are both dangerous to the body as well as the mind.

As the homosexual activist in the video explained, they have to lie to get their agenda through.  What is their agenda?  Please watch the well documented presentation of Scott Lively on the history and goals of the homosexual movement.