Utah Legislature Moves to Remove Power of the Sheriff 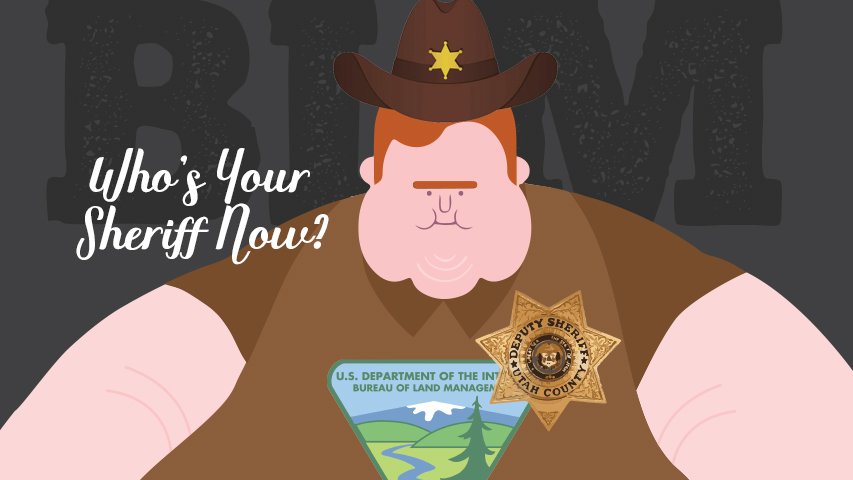 Former BLM employee, Representative Mike Noel (R-Kanab) introduced HB276, the “UTAH PUBLIC LAND MANAGEMENT ACT.” Sold as a further step in getting “public land” turned over to the state, but hidden inside is a move to remove the ability of the local sheriff to protect the people of his county, and give it to a bureaucratically controlled state or regional policing agency.

Defending Utah has reported on several occasions the aspects of the Transfer of Public Lands Act and associated legislation that are actually “bait and switch” schemes, tricking us into believing we were getting our land back, but in reality we were being sold bigger government bureaucracies, unaccountable regionalism as well as a money making scheme for connected politicians.

In fact, LaVoy Finicum was on our radio program exposing the fact that,

“The Federal Government loves the American Lands Council (chief promoters of the TPL).  Because what do they do?  They keep it in the legislative arena. They keep it in the judicial arena… The Federal judicial arena. They (the feds) like that because they’ll never lose.  They’ll just keep stretching it out, they’ll stretch it out for thirty years.”

Representative Ken ivory [kuh-nahyvoree] (R-West Jordan) has been the chief proponent of this big government scheme, but Representative Mike Noel (R-Kanab) has been entering the fray in an attempt to stop the ranchers from standing up for their rights. In January of 2016, ranchers in southern Utah met to discuss declaring independence from the unconstitutional Bureau of Land Management. LaVoy explained that,

“Mike Noel, and this group found out about this, and they ran out there the next week saying ‘No, no! Give us more time. We will get this done. Don’t do that.’ And so it took the steam out of it, and that could have been the first full county, because they have the sheriff behind them, they could have been the first whole county in the Union to throw off this federal chains…”

Representative Noel did not stop at this betrayal of his constituents and the people of Utah. In this legislative session of 2016, Noel introduced HB276, the “UTAH PUBLIC LAND MANAGEMENT ACT.”  Sold as a further step in getting “public land” turned over to the state. However, like the other “transfer” bills, what this bill does is much different than what its promoters sold it as.

The most egregious part of this bill is its attack on the local sheriff, one of your last lines of defense against a tyrannical government.

Lawmakers tried to placate any fears by stating in the bill that the law cannot “be construed as enlarging or diminishing the responsibility or authority of a state certified peace officer”.  However, understanding jurisdiction is important to seeing through this smokescreen. HB276 gives PRIMARY authority to these regional policing bodies, automatically putting any local sheriff in a back seat position to defending the rights of the people on land usurped by a government agency.

Representative Noel promised the ranchers that they needed more time to go the legislative route. Did those that Noel convinced to accept the legitimacy of the BLM know that attacking the local sheriff is what he had in mind?

UPDATE: MIKE NOEL ADMITS IT, AND DEFENDS IT
The Petroglyph contacted Represented Mike Noel about our article, to which Representative Noel responded,

“The sheriff will be the primary officer to deal with all state and county laws excluding wildlife issues.“

That is exactly what we have been reporting, the power of the sheriff on “public lands” (as the bill states) is not the primary police agency.  We must remember that it was the desert tortoise that the BLM used to justify its take over of the Bundy ranch, and with this bill that is all that would have to be done in Utah to remove the sheriff from his position of our primary defense of the liberty of the people.

Also, listen to our interview on the Kate Dalley show on this subject below:

3/16/2016 – UPDATE: Utah Sheriffs Association Responds…  but their response is incomplete and inadequate.

Other liberty activists speaking out against HB276