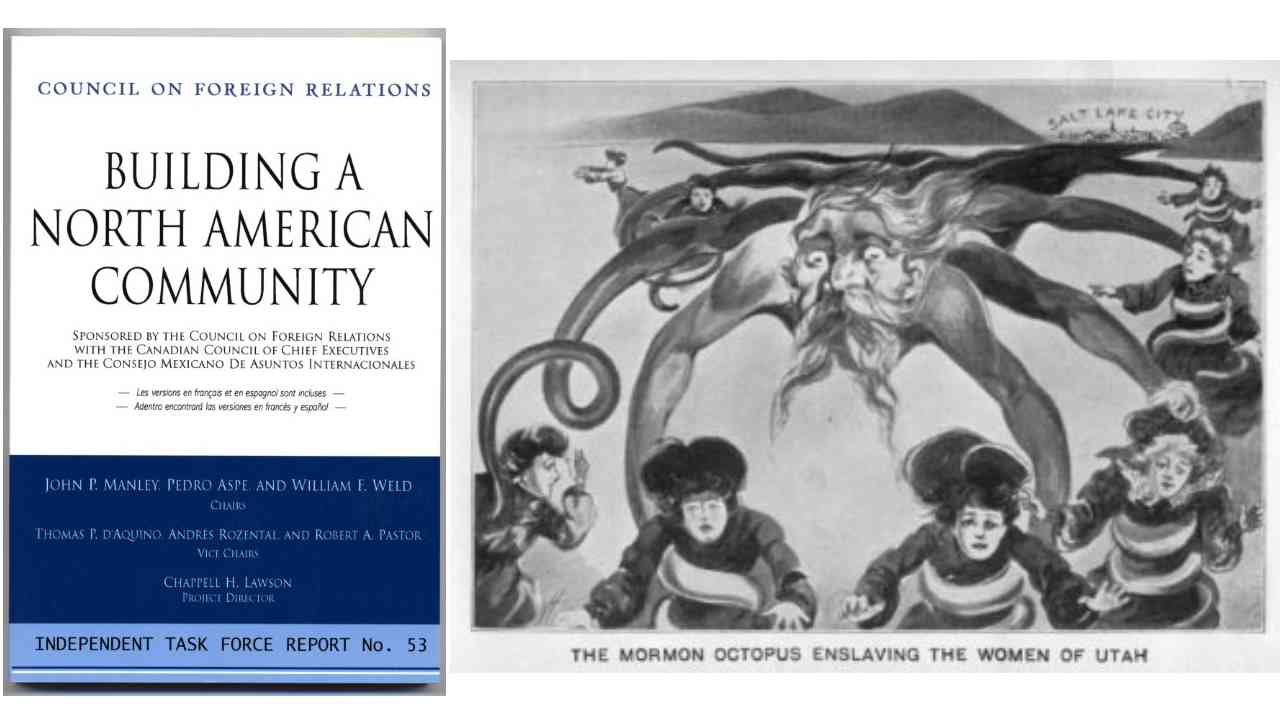 Natural Rights must be equally defended for all

“The rights you deny to others today, will be the rights denied to you, tomorrow.”

Immigration is used by the establishment to manipulate cultures either by blocking certain groups from immigrating, or by welcoming large groups of people into the nation. They know that when you change the people, you change the culture and one way this is being done is through mass immigration in an effort to water down the culture of freedom. False opposition is also being used to support this agenda. This issue can be very confusing because the enemy is using both sides. First let us cover what they are using mass immigration for, then we will cover how they are using anti-immigration laws to support the same agenda.

For those of you not aware of the push for a North American Union (modeled after the European Union), we will give a short overview.

NAFTA was an early step in moving us in this direction (USMCA was the next big step). Very few know what NAFTA was even about.

“This is the biggest threat to United States Judicial Independence that no one has heard of and even fewer people understand…” – John D.

“It’s rather shocking that the highest courts of the state and Federal Governments could have their judgements circumvented by these tribunals.” – Chief Justice Ronald M. George, California Supreme Court

“It will represent the most creative step toward a New World Order taken by any group of countries since the end of the Cold War. …It is not a conventional trade agreement but the architecture of a New International System.” – The Los Angeles Times, July 18, 1993

One of the earliest published accounts of this plan to use trade to politically merge countries was in Nelson Rockefeller’s 1964 book, “The Future of Federalism”. Rockefeller states,

“the road toward the unity of… nations lay through regional confederations- in the Western hemisphere and in the Atlantic community, perhaps eventually in Africa, the middle east and Asia.  Such work toward regional unities, is in fact, steadily progressing.  The Common Market in Europe is an outstanding example.” pg. 75

This is done through a step-by-step measure as he lays out on page 78, saying that there is a need,

“of removing barriers to commerce; and ultimately to the gradual devising of political forms of unity.”

The same plan continues to this day. In a report given to the US Congress in June 2005, Robert Pastor said the goal is to,

“Have a common perimeter for all of North America… [with] an exchange of personnel, bringing       Canadians and Mexican into the department of Homeland Security”

They have a long-range goal but we are getting closer to the time where they want this vision to be in place. Richard Haas the president of the Council on foreign relations, said,

“Sovereignty–the notion that governments are free to do what they want within their own territory–has provided the organizing principle of international relations for more than 350 years. Thirty-five years from now, sovereignty will no longer be sanctuary. Powerful new forces and insidious threats will converge against it… This is most clearly being done in the trade realm.“  -Richard Hass, Foreign Policy magazine, September/October 2005, “Say Goodbye to Sovereignty”

Immigration Laws Against the Mormons

Many people are supporting a ban on immigration today for certain religious groups such as Muslims. When looking at banning groups of people as a whole, it is important to ask ourselves “why?”.

Most today are not aware that there were similar proposals against the Mormons in the 1800s.

Just like today, the effort begins with a public relations smear job.  An 1881 essay in Harper’s Magazine stated, Mormonism “is an institution so absolutely un-American and all its requirements that it would die of its own infamy’s within 20 years, except for the yearly infusion of fresh surf blood from abroad “. The point was made more widely by fictionalized reports that the Mormons imported young, innocent girls to become polygamists, were said to be in a sort of religious white slavery.

The president of the United States was not above falling for such propaganda back then either.

President Ulysses S Grant recommended the Congress, in his annual message on the seventh of December 1875, that it “drive out licensed immorality, such as polygamy and the importation of women for illegitimate purposes “.

In 1870 Chief Justice James B McKean, presiding over the District Court in Salt Lake City, ruled that a mere belief in polygamy was sufficient grounds for refusing to naturalize an alien regardless of whether the applicant was involved in its practice.

In 1879 Secretary of State William M Everts sent a message to diplomatic offices in Europe calling on Europe’s governments for assistance:

“Under whatever specious  guise the subject [of polygamy] may be presented by those engaged in instigating the European movement to swell the numbers of the law defying Mormons of Utah, and the bands of organizations which are got together in foreign lands as recruits cannot be regarded as otherwise then a deliberate and systematic attempt to bring persons to the United States with the intent of violating the laws and committing crimes expressly punishable under the statute of penitentiary offenses.”

In 1885, President Grover Cleveland recommended to Congress that it prevents the importation of Mormons into the country.

in 1889 Justice Thomas J Anderson denied citizenship to foreign born Mormons because “the religious covenants administered in the endowment house required them to pledge allegiance to the church’s laws above and against those of the United States.”

In 1891 Congress again acted, adding polygamists (a clear reference to Mormons) to the list of classes excluded from the country. Congress later passed legislation which dissolved the churches perpetual immigration fund, as well as seizing all of its assets.

One elected official even said about the Mormons, “why allow them to come here if they’re just going to break the law?”

It’s easy to see that even though the conspiracy uses immigration to flood people into an area to change its culture, they also block immigration to change the culture. It is important that we apply correct principles, and not just jump on bandwagons based on emotion. What is applied to one group, can easily be applied to your group.


We must ask ourselves, “why is the government/media trying to ban a certain group from coming into our country?”. What is the endgame? Here are some examples of how the media is clearly lying to promote an agenda.

The first comes from a report in 2008 about a girl that is four years old, that was attacked by a Rottweiler.

This second article from 2015, using the same photo, depicts a supposedly 12-year-old boy who was beaten by Muslims., supposedly just “because he had blue eyes”.

Now, this is not to say that the BBC news is more reliable than Jews news. However, we can use deductive reasoning to see that one of the articles is completely false. The first one reported in 2008 describes a four-year-old girl, that was attacked by a dog, while the second article from 2015 says the same child is a 14-year-old boy. Looking at the picture, which is more accurate? It’s clearly not a 14-year-old. And the eight year difference in articles really makes it look like the author was just creating a false sensational story to create a response in the reader to believe something that was false. We must ask ourselves why? Why would a popular news site want to lie to its readers? Is history repeating itself? What can we learn from history?

Understanding the goals of the conspiracy can help us see through the propaganda and not fall prey to emotional manipulation giving our would be master more power over us, shifting the culture to what they want it to be.