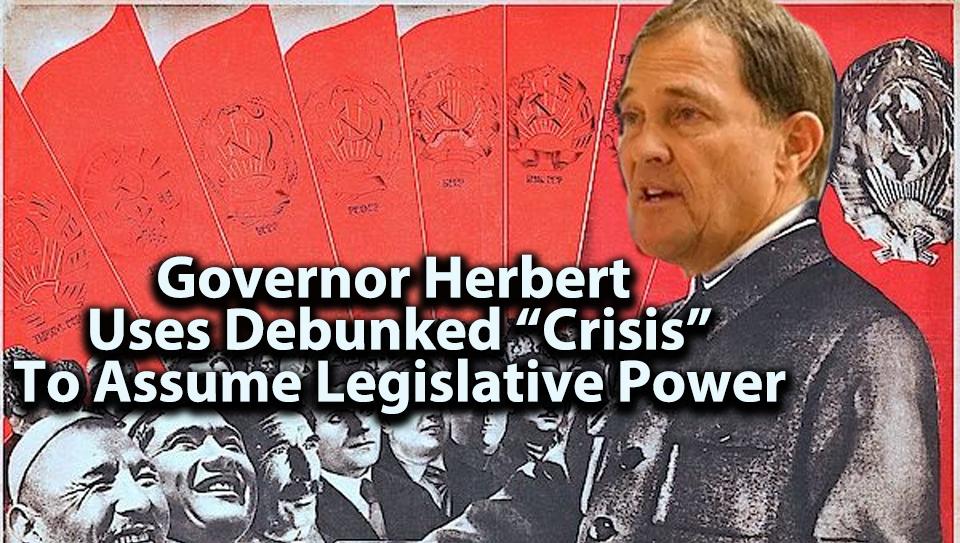 Thursday March 26th 2020, (under the premise of a now debunked crisis) Governor Gary Herbert issued an executive order unilaterally suspending legislation and statute governing election law allowing candidates additional time to collect signatures to get on the ballot. This seemed like a blatant unconstitutional power grab, passing legislation (temporary I’m sure) independent of the legislature and a violation of the basic American principle of separation of powers. Unfortunately, though, it was the legislature, through what the founders called “pretend legislation”, that gave him this power just five years ago.

Article VI Section I of the Utah constitution states that the legislative powers are vested in the hands of the….. Legislature.

Governors across the country are using this fake emergency to justify the destruction of basic rights supposedly guaranteed under the US and state constitutions, and now Herbert uses the situation to make himself the legislative as well as executive branch of government. Maybe next he’ll add judicial powers making James Madison’s warning complete when he said,

“The accumulation of all powers, legislative, executive, and judiciary, in the same hands, whether of one, a few, or many, and whether hereditary, self-appointed, or elective, may justly be pronounced the very definition of tyranny.” Federalist 47

Surely a power grab such as this received backlash and our “stalwart” defenders of liberty and the constitution in the legislature put up a fight and refused to support this monstrosity!? NO. The vote in both the House and Senate were unanimous. That’s right, every single vote was a “yes” vote for giving the governor power to unilaterally “suspend” statute, making the legislature nothing but a symbolic body during times of “emergency”.

This is reminiscent of ancient Rome and Incitatus. Who was Incitatus? In 39AD the Roman Senate had devolved into a legislative body that was chosen by the Emperor and passed whatever they were told. The body was so useless in its role that Emperor Caligula appointed his horse Incitatus the Senate’s consul. The Roman Senate confirmed this appointment, further proving how worthless they were.

Will our state legislature continue this tradition, or will they realize the error of their ways and remedy the situation immediately?  The answer partially lies with the people and if they will demand their legislators act or if we continue to allow them to destroy our Republic.

Pick up your copy of “The Proper Role of Government: A 21st Century Manifesto for Good Government”