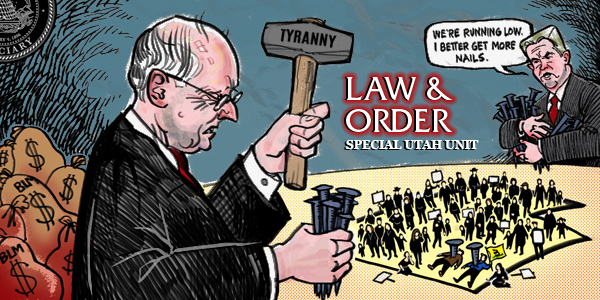 State legislator Phil Lyman (R-Blanding) is once again coming face to face with the threat of court action. If you’re not aware of Lyman’s long battle with fraudulent federal charges, you can catch up on our previous program here.  In short, Lyman and co defendant Monte Wells were convicted of riding off-road vehicles, after obtaining permission from the BLM, in Recapture Canyon. For the truth about this event check out this report from The Petroglyph.

In 2019 the United States of America, through its attorney John Huber, attempted to change the rules they had established and agreed to comply with regarding their case against Lyman, attempting to require him to pay more than had been agreed upon. When their own courts ruled against that idea the United States is now attempting to compel Mr. Lyman, in violation of the fifth amendment to the Constitution, to testify against himself by trying to force him to turn over tax returns for 2017, 2018, and 2019, with a deadline set for May 1st 2020.  Mr. Lyman did not respond to the Unites States’ request who then extended the deadline to August 1st 2020. Mr. Lyman again did not respond.

One thing we find especially interesting about the request of the United States is that they cite media reports and an email as their method of communicating the request. How many news stories does the average person never see or hear?  How often do emails go to spam, get dismissed as scams, or just plain don’t make it to their intended destination? We can only pray that this isn’t how we’re “served” legal notices in the future.

After the passing of the August deadline the United States issued a request to its court in Salt Lake City to compel Mr. Lyman, ironically on Constitution day September 17th, to produce the tax returns, in violation of the Constitution, or be held in contempt.

Mr. Lyman accurately points out the massive bias of the United States when he said:

“Selectively trying Mr. Wells is confirmation that this entire trial was a show. With more the 500 people engaged in a legal, peaceful, advertised protest, and then selecting for prosecution five men with a history of criticizing activists from the environmentalist community is blatant abuse of the law, on its face. Making sure the Nathan Brady was assigned to Mr. Wells as his public defender was nothing but conspiracy on the part of the courts.”

“Why would the U.S. Attorney ask me to pay more than what has been ordered by the court? And a key contextual element that Huber, again leaves out, is that his request was made public in the Salt Lake Tribune before any formal request was ever made to me. This is defamation at its core. It is not the desire of Mr. Huber to see if my financial circumstances of have changed, it is his desire to castigate me. It is repulsive and reprehensible, but entirely customary with his office.”

For any media outlet to claim to be unbiased is dishonest and condescending, so we will not claim to be unbiased here. However, our bias is to the Constitution and NOT to any person or personality. The actions of the United States have been clearly vindictive and blatantly in violation of the Constitution as cited above and in Mr. Lyman’s response.

It is clear that the courts are NOT where your rights are defended, and, in fact, NEVER were supposed to be.

Thomas Jefferson clearly laid out this fact when he helped write the Kentucky resolutions of 1798 & 99:

“The several states who formed that instrument, being sovereign and independent, have the unquestionable right to judge of its infraction; and, That a nullification, by those sovereignties, of all unauthorized acts done under color of that instrument, is the rightful remedy.”

Mr. Lyman’s colleagues in the Utah State Legislature should have been, and should be, working over time to nullify the conviction of Lyman and Wells and protecting them against any further abuse.