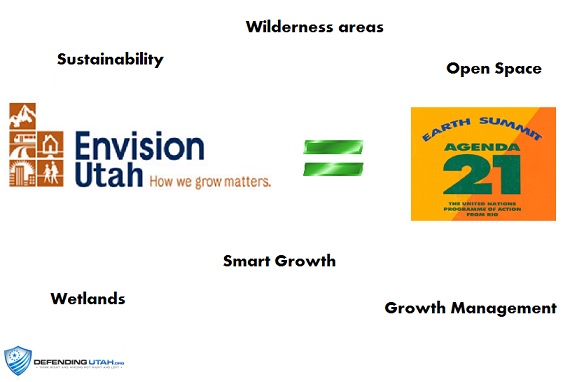 Envision Utah is the example being held up by Agenda 21 advocates as the model to follow, and the model is deception.

“Effective execution of Agenda 21 will require a profound reorientation of all human society, unlike anything the world has ever experienced a major shift in the priorities of both governments and individuals and an unprecedented redeployment of human and financial resources. This shift will demand that a concern for the environmental consequences of every human action be integrated into individual and collective decision-making at every level.” Excerpt from Agenda 21 official document

For a more detailed report on Agenda 21, its history and plans, check out these reports here and here

This resolution shows that Agenda 21 is not only a reality, but that it is a real threat that the majority of the legislature recognized enough to go on record.

What Does Agenda 21 mean to me?

“Sustainable development” is one of the vague buzzwords used by Agenda 21 supporters.  It is one of those words that sounds good, but really could mean anything to anyone, so what does it mean to those who created Agenda 21 as well as the phrase?  During the opening speech of the Rio summit that created Agenda 21, Under Secretary General to the United Nations, Maurice Strong said,

“Current lifestyles and consumption patterns of the affluent middle class – involving high meat intake, use of fossil fuels, appliances, air-conditioning, and suburban housing – are not sustainable. A shift is necessary which will require a vast strengthening of the multilateral system, including the United Nations.” -opening speech at the 1992 Rio Earth Summit

Enter Envision Utah. According to its website, Envision Utah was formed in 1997 “to keep Utah beautiful, prosperous, healthy, and neighborly for future generations.”

How did the founders of Envision Utah plan on accomplishing this vague, nebulous, could mean anything – so it means nothing goal?  According to their supporters at the Brookings Institute, Envision Utah accomplishes their goals through deception.

Deception is key to the framers of the Agenda 21 scheme. J. Gary Lawrence, advisor to Bill Clintons Council on Sustainable Development explained,

conspiracy- fixated groups and individuals in our society… This segment of our society who fear ‘one-world government’ and a UN invasion of the United States through which our individual freedom would be stripped away would actively work to defeat any elected official who joined ‘the conspiracy’ by undertaking LA21 (Los Angeles’ version of Agenda 21). So we call our process something else, such as comprehensive planning, growth management or smart growth.”

In December of 2012 Brookings Mountain West, an official branch of the Brookings Institute operating out of the University of Las Vegas in Nevada, put out a paper on Envision Utah entitled, “The Utah Model: Lessons for Regional Planning”. Remember that phrase, “regional planning”. (you can download the report here)

In the Brookings document it explains,

“Utah has become an unlikely leader in regional planning —the organization that emerged as a key driver of regional planning in Utah—in building a consensus around regional growth management holds lessons for other regions.”

Envision Utah is held up as the example to follow. Continuing, the Brookings report explains the success of Envision Utah in this “regional growth management”,

“Envision Utah conducts a professional survey of the local values before beginning any particular project. The results are used to tailor the language of the public process and frame the proposals and principles so that they are widely acceptable.”

Envision Utah starts with an end goal in mind, then takes surveys among the people to find out how to sell their program by “tailoring” aka altering, the language of the upcoming propaganda campaign so that the program can become “widely acceptable”.

Brookings elaborates on the deception used, and that should be duplicated elsewhere saying,

“…in many cases it was a matter of rewording old ideas to match up with the identified values “highdensity housing” becomes “housing choice” for young families and aging parents.”

Again, they admit deception is the key to their success. Instead of labeling the condensed, shove everyone together housing what it is, they use vernacular popular in Utah and call it “housing choice”.

The deception continues to their current campaign to get “50,000 voices” (remember that they take the surveys so that they know how to word their already developed programs and NOT to get your input on what to do).  The “survey” (which they are bribing schools $1 per child to fill out) gives options to choose from on how Utah “should grow” in the next 50 years.  This “fifty year plan” is also a part of their strategy of deception. The Brookings report explains,

“The organization never uses immediate land use controversies or public disagreements as springboards to participation and political action…   The language of long term values replaced more urgent “take your medicine” messages that might have turned people away.”

This explains that Envision’s “50,000 voices” campaign was part of their program to get people to not think about what they are doing because you don’t “have to take your medicine now”.

The campaign gives you options which are designed to get you to support a predetermined outcome through naming and supposed results of the choice you made. Because you know, the people at Envision Utah are prophets and know the future.  The manipulation goes so far as to name the option that allows for property rights after a dinosaur, you know, because dinosaurs are extinct and you will be too if you choose liberty.

If Envision Utah has to use deception and manipulation to sell their agenda, it is self evident that it is not something that most of us would support.