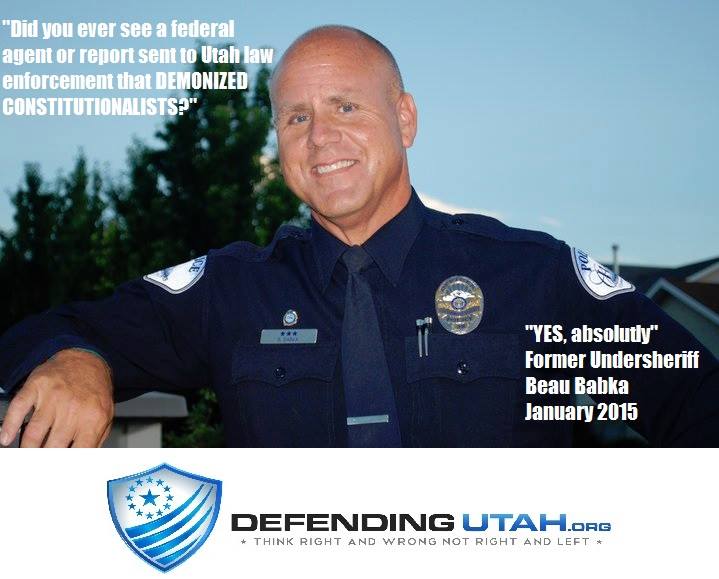 The infographic at the end of this article is a great overview to show what national, centralized control and influence has been doing to local policing as it has crept into our local police departments.

Defending Utah: Did you ever see a federal agent or report sent to Utah law enforcement that demonized constitutionalists?

Defending Utah believes we should support the office of the local Sheriff in protecting our inalienable rights under the United States Constitution, so long as that sheriff keeps their constitutional oath.

Federal agencies are arming our local authorities with “surplus” military equipment, and then propagandizing those who are sworn to serve and protect, with the idea that law abiding citizens are the enemy if they don’t believe in the marxist system that is taking over.  This seems to be a long term strategy (not a quick change).

According to a database published by the Detroit Free Press, On March 11th, 2013, the federal government gave Salt Lake County two grenade launchers for $720 each. In fact they’ve spent at least $600,000 on surplus military equipment since 2006.  Two other counties that also bought grenade launchers from the feds are Box Elder County and Juab County.  Salt Lake also bought two of something called “HELLFIRE HIGH INTENSITY” for almost $8,000 each.  What in the world does Salt Lake need high intensity FIRE from HELL for?!?!  (Maybe one could ask the feds, since they’re the pushers?)

St. George News wrote an article in favor of this tank here: http://www.stgeorgeutah.com/news/archive/2017/10/07/cgb-hurricane-police-department-unveils-civilian-rescue-vehicle-a-project-1-year-in-the-making/#.WfDpIHa1uUl

David Browning, chief of police in the City of Enoch, described in a conversation with Defending Utah a federal training he participated in that illustrates this concept.

Other officers that might not have the same love, or knowledge, of the United States Constitution could easily be influenced by such training to see anyone that seeks to prevent tyranny, just like the founding fathers, as threats. They could more easily escalate a situation to an unjustified level by the simple act of quoting, referencing or even carrying of the U.S. Constitution.

WHAT IS THE END GAME?

As more and more national oversight and regulation creeps into local law enforcement, this problem tends to grow bigger.

If patterns of past decades are repeated, the feds will eventually want to “save us” from our local law enforcement with a fully national police that will not have any accountability to the people they “serve”, even though the training leading to these abuses is coming from the federal government.  The John Birch Society produced a 1966 documentary, “Anarchy, USA,” which exposed a 5-step plan by communist groups, that had the eventual goal of creating a national police force, which requires making local police either act bad, or just appear to act bad.

On that note, Defending Utah even wrote a report on recently leaked Russian documents that proved the soviet union was meddling in internal US affairs within the civil rights movement during that time.

Patrick Henry, in his famous “Give me Liberty” speech said…

Let us not deceive ourselves, sir. These are the implements of war and subjugation; the last arguments to which kings resort. I ask, gentlemen, sir, what means this martial array, if its purpose be not to force us to submission? Can gentlemen assign any other possible motive for it? Has Great Britain any enemy, in this quarter of the world, to call for all this accumulation of navies and armies? No, sir, she has none. They are meant for us; they can be meant for no other.

Defending Utah acknowledges the growing problem of police corruption.  We have even written many articles on local police abusing their power.

But just as in times past we caution that there is an agenda which is deliberately making this real problem far worse.  And those involved are ready to offer you a solution that will be worse than the original problem.