Who the Establishment Wants to be President… STOP Supporting This Person

If you have been paying attention to the U.S. presidential election, you will notice reports from all the major news outlets saying that the Republican 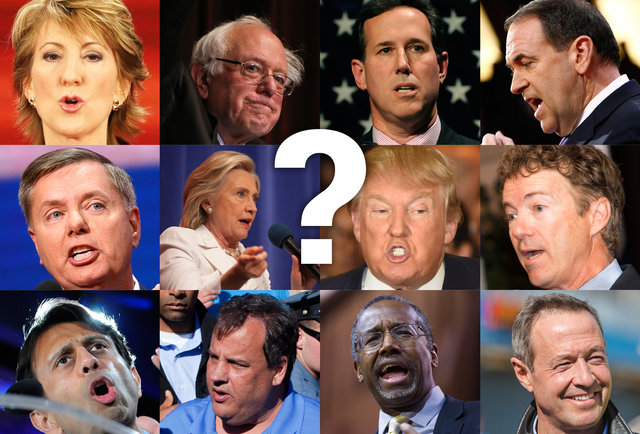 In the anti-establishment atmosphere we are in, it is essential that all of the candidates appear to be outsiders who are “feared” by those promoting the status quo, but what the above (as well as each of the candidate’s record) shows is that the establishment likes all of them and it is all a show for our benefit to distract us and our resources away from activities that will actually make a difference in the cause of liberty.

“But… but… but… This is the most important election of our lifetime!” you say.

Franklin Graham said it, Bloomberg said it, even Joe Biden said it.  Oh wait, that was in 2008. And Bill O’Reilly said it in 2012.  Actually, this rhetoric is used every… single… year.  The New York Times was even saying it as far back as the election of 1864 saying,

This is part of an orchestrated campaign to distract us from the cause of the issues we face. Georgetown University professor, Carol Quigley said,

“There does exist, and has existed for a generation, an international Anglophile network. I know of the operations of this network because I have studied it for twenty years and was permitted for two years, in the early 1960’s, to examine its papers and secret records. I have no aversion to it or to most of its aims and have, for much of my life, been close to it and to many of its instruments. I have objected, both in the past and recently, to a few of its policies … but in general my chief difference of opinion is that it wishes to remain unknown, and I believe its role in history is significant enough to be known.” (Tragedy and Hope: A History of the World in Our Time, The Macmillan Company, 1966, page 950)

Professor Quigley explained that this network works to trick the people into believing there are differences in the candidates, so that the network’s operations can go unchanged. All the while, the masses fight thinking they are making a difference.

“The two parties should be almost identical, so that the American people can ‘throw the rascals out’ at any election without leading to any profound or extensive shifts in policy” (Tragedy and Hope: A History of the World in Our Time, The Macmillan Company, 1966, pages 1,247-1,248)

All of the presidential candidates have strong connections to this establishment network spoken of in “Tragedy and Hope”.  Getting us to focus on the Presidential election, as if it mattered, helps their efforts to prevent “profound or extensive shifts in policy”.

Ezra Taft Benson explained that “electing the right guy” isn’t what will save, preserve or restore our lost liberties,

This is not a new issue.  We have been taught for many years that we were making a grave error in looking to these men for our political salvation.  Hyrum Smith explained,

“Men of false principles have preyed upon us like wolves upon helpless lambs. Damn the rod of tyranny; curse it. Let every man use his liberties according to the Constitution” (History of the Church, Vol.6, Ch.15, p.323)

The Savior Himself explained,

“The devil is ruling over his kingdom and my spirit has no place in the hearts of the rulers of this nation, and the devil stirs them up to defy my power and to make war upon my Saints.” (Revelation to Wilford Woodruff, Jan 1880, LDS Church History Library, call number: MS 20236)

Focusing on getting the “right guy” elected has never and will never be what restores our liberty. We know this is true by how hard the establishment works to get us to focus on it. Let’s look at it practically.

Scenario #1: The people do not understand the principles of liberty, only the candidate that speaks to their desires and understanding of government will win.

Scenario #2: Somehow the liberty candidate wins. To stay in office, he will either mold to his constituents, or he will be voted out the next term.

Only a targeted action program of restoring a culture of liberty among the electorate can have any effect in the cause of liberty.  Our government reflects the understanding and morals of its people.  Focusing on elections is feeding the system of tyranny, therefore it will never be the answer to restore liberty.

Which candidate does the establishment favor?  Any of them.

Ben McClintock is co-founder of Defending Utah, author of multiple publications, and host of the Defending Utah TV/Radio show. Ben is also an investigative journalist, an educator at private schools, and a chicken farmer.

EVENT Feb 4th 2022 PROPAGANDA! The Conspiracy’s Tricks & Deception & How You Can Break Free

Pandemic 2 Years Later – Who Was Right Who Was Wrong

This Utah City Says NO to the Mandate

EVENT Feb 4th 2022 PROPAGANDA! The Conspiracy’s Tricks & Deception & How You Can Break Free

Pandemic 2 Years Later – Who Was Right Who Was Wrong