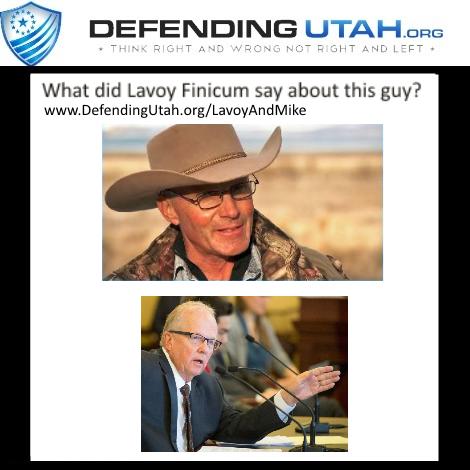 Representative Mike Noel of Kanab Utah, who recently sponsored legislation to weaken the power of the constitutional sheriff (call the governor at 801-538-1000 to have him veto), has claimed multiple times that Defending Utah lied about what Lavoy said.  If we lied about it, we’d be violating our own motto of “think right and wrong not right and left” because lying is wrong.  We have done nothing but report the facts for the people to hear themselves.

So in response, we provide the audio and text transcript below, as a witness to what Lavoy Finicum said that Mike Noel did.

Less than a week before his death, Lavoy Finicum had something to say about Utah Representative Mike Noel from Kanab Utah.

The follow words are not the words of any representative of Defending Utah.  We are simply reporting the words Lavoy Finicum chose to share.

And he says bring the people that says that they’ll stand beside you and support you physically, so I brought them too.  Or they actually invited them on their own.

And so, we were all there in that meeting.  And at the end of that meeting they said, we need to do this, let’s sign this emancipation of all these contracts.

They said, let’s do it now, and they were about ready to do it.

And Mike Noel and this group (The American Lands Council) found out about this, and they ran up there and said ‘no, no, no, give us more time, we will get this done, don’t do that, don’t do that’ and so it took the steam out of it.

We also reported on what he said about the entire American Lands Council in this article.

If you desire, you can listen to the bigger segment from our interview with LaVoy Finicum in context here:

Surprisingly, according to the Salt Lake Tribune, no one has stepped up to run against Mike Noel yet in this year’s elections.