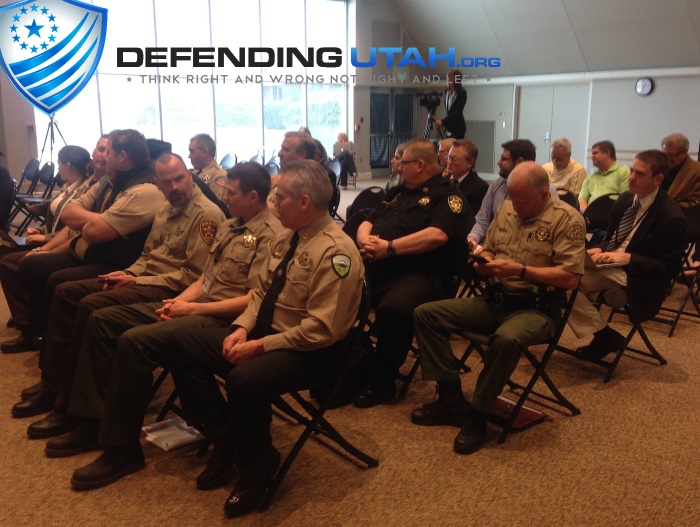 Yesterday I attended a meeting at the Capitol that Utah Legislators Mike Noel and Keven Stratton held with several sheriffs to pat themselves on the back for their Bill HB276. This bill, as they’ve admitted takes away authority from the Sheriffs in wilderness areas, and gives it to a new agency created in the bill, the DLM (Department of Land Management).  No biggie right?  We won’t be needing our constitutional rights protected by a sheriff in the ever growing ‘wilderness areas’ any time soon…  right?

They claim to have invited the opposing view for discussion yet as they filmed the TV show, The County Seat for KUTV, not one opposing view, comment or question was allowed on camera

Constitution Scholar (PHd) Scott Bradley, who drove a far distance, said his concern was that it created the DLM.

“I have a concern that this creates the Division of Land Management. Sounds notoriously like the Bureau of Land Management, you change the B to a D. I see this as being a ‘mini-me’ kinda thing. Where the BLM oversight is being transferred to the state. That’s nice that we have it closer to the state. But honestly the state takes ownership and control of all federal lands, it has the power to create all regulations according to this bill, pertaining to this land, it establishes fees, for access use of land. And it has the power to create an independent policing agency…”

“It has the power to enforce the regulations in the land, the power to adjudicate things that come up in question, an internal court system if you will, and all these things violate the separation of powers that have been americanist from the very beginning of this country… “

“…and the power to transfer any land is withheld until approved, so really in short it does create an all powerful Utah czar of lands and I’m very concerned that so many of the abuses that historically have been under the BLM…”

I bet you can fill in the blank there yourself. Do we as citizens vote for the same abuses magnified on a local level? If so it looks like HB276 is your best shot!

Dr. Bradley went on to say, “The Americanist way really is stewardship. And we’ve just been promised, Mr. Noel by you, that we’re going to keep these lands public. The source of all the wealth is coming from the land. And stewardship with private ownership is important. This is the very definition of socialism… government, ownership, and control.”

After all this, when the Lieutenant Governor calls it “a great step forward”, one must wonder, what direction they are stepping?

The arrogance of these men was astounding. They presume if you aren’t a lawyer you have no business disagreeing with them about how they are destroying liberty in front of your eyes. When confronted about the lines that place the DLM above that of the Sheriff Mike Noel has been known to have retorted, “are you a lawyer?”

Calling this bill a “placeholder bill”,  Mike Noel reassured us time and again that it didn’t go into effect yet so we can trust them to fix anything that might need it, because we all know, that Liberty once lost is easy to fix. Or was that,

“ we stand in danger of losing our liberties, and that once lost, only blood will bring them back”,

thanks for the reminder J. Rueben Clark.

Please, call the Governor now at 801-538-1000 and leave a quick message demanding he veto SB276.
Also call your sheriffs and ask them to stand up for their own authority and the authority of the sheriffs office in the future.

Your sheriff listening to Mike Noel’s propaganda, that taking away his authority is somehow a good thing.

Calling it a “limited scope” some sheriffs seemed content with pawning their jobs off onto another agency as long as it was in areas of ‘cattle, grazing, or wilderness’ but some upset citizens in the audience who have studied Agenda 21 begged them to reconsider actually taking their position seriously and to protect our families from our loss of property and loss of human life that accompanies it. Can they really pretend this has nothing to do with our families? That it falls upon THEM within THEIR jurisdiction, after all, don’t families tend to own the ‘cattle’? Are they living under a rock and haven’t seen how the Hammonds and the Bundys have been swept into political imprisonment because of the similar lack of Constitutional Sheriffs with a backbone? Are we as a people really willing to sacrifice more good citizens to this pattern of overreach? (Citizens that incidently provide the goods you enjoy from the land). Perhaps they need citizens like YOU to ask them to man up to their duty. You can find and write them here: https://utahsheriffs.org/sheriffs/

One of the most surprising parts of this meeting, was when the Lieutenant Governor stated that even though they’ve had a surprising amount of controversy and citizen phone calls over the bill they planned on signing it anyway because it wasn’t fair to veto a bill without the consent of the sponsors of the bill, or as Spencer Cox  states, “without the support of those who’ve worked so hard to get this passed”.

Excuse me? Did you just say you needed to ask the people who made the bill if you can veto it?  I couldn’t help but have THIS pop into my head:

“insomuch that they did unite with those bands of robbers, and did enter into their covenants and their oaths, that they would protect and preserve one another”.
– Helaman 6:22

Destroying the Power of the Sheriff, A Regional Police Force and Agenda 21