In the 1990’s it was the Democrats promoting the idea that private morality means nothing in the political arena.  Sadly, today people from both major parties are promoting this lie to excuse the state of major politicians in their parities.

Too often those of us that like to consider ourselves “defenders of liberty” want to separate morality from liberty. If we are actually to restore the culture of liberty, it is vital that we shed this lie from our minds and work to help others understand as well.

The Apostle Paul lays out the truth of the matter to the Corinthians when he said,

Having the Spirit of God is essential to restoring and maintaining liberty, for as the first governor of “Utah” said,

“The Gospel of Christ is the perfect law of liberty. What say you, be subject to law – is this liberty? Yes, it is liberty” –The Complete Discourses of Brigham Young 1:229

The enemies of freedom understand this principle all too well and are working hard to destroy the morals of society because they know that is how you fundamentally destroy the liberty of the people. According to the “Communist Rules for Revolution” it is essential to:

“Corrupt the young, get them away from religion, get them interested in sex… By specious argument, cause the breakdown of the old moral virtues, honesty, sobriety, confidence, faith in the pledged word, ruggedness.”

Key goals of those that seek to destroy our freedom, as recorded in the Congressional Record, are to:

Break down cultural standards of morality by promoting pornography and obscenity in books, magazines, motion pictures, radio, and TV.
Present homosexuality, degeneracy and promiscuity as “normal, natural, healthy.”
Infiltrate the churches and replace revealed religion with “social” religion. Discredit the Bible and emphasize the need for intellectual maturity, which does not need a “religious crutch.”
Eliminate prayer or any phase of religious expression in the schools on the ground that it violates the principle of “separation of church and state.” (see Congressional Record–Appendix, pp. A34-A35 January 10, 1963)

Even in the 1700’s, the enemies of freedom knew they had to attack religion and morality to be successful in their efforts. James Robison in his expose of the Bavarian Illuminati and the French Revolution explained that it was essential for the “revolutionists” to

“Root out all religion and ordinary morality, and even to break the bonds of domestic life, by destroying the veneration for marriage-vows, and by taking the education of children out of the hands of the parents.” Pg 215

What Happens To Liberty When You Lose Morality?

It is a true principle that “when we obtain any blessing from God, it is by obedience to that law upon which it is predicated.” (D&C 130:21).  If we want good health, we need to eat right and exercise. If we want knowledge, we need to study. Any society that wants to be free must be moral. Though ancient Rome wasn’t Christian, they actually did enjoy unparalleled freedom, liberty and prosperity because they followed correct principle.

Rome started as a monarchy about seven centuries before Christ. If ancient traditions are to be believed, Rome’s first real king, Numa Pompilius, was a very enlightened monarch, who in three decades of rule did much to civilize the Romans and soften their warlike disposition. Succeeding kings, however, were not so benevolent. 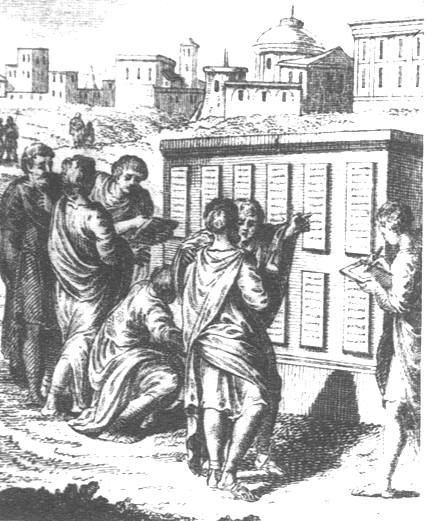 An Etruscan dynasty known as the Tarquins ruled Rome for several generations, until an incident that took place under Tarquinius Superbus, or Tarquin the Proud, set in motion a chain of events that led to the expulsion of the Tarquins and the establishment in Rome of a new kind of government.

Tarquinius’ son, Tarquinius Sextus, developed an obsession for a certain Lucretia, the wife of a Roman aristocrat. One night Sextus crept into Lucretia’s house when her husband was away and violated her at knifepoint. Immediately afterward, the grieving Lucretia summoned her husband and father and told them what had happened. She extracted from them a promise to avenge her stolen virtue, and then committed suicide on the spot as a further witness against Tarquinius Sextus. Her grieving husband and father and two eminent Romans, Lucius Brutus and Publius Valerius, carried her body to the Forum and raised a hue and cry against the Tarquins. A revolt ensued as thousands of Romans flocked to their standard. The Tarquins were expelled, and the Roman republic was set up.

Publius Valerius, incidentally, became one of Rome’s first consuls and was the man most responsible for framing the original republican government of Rome. This great statesman was the very embodiment of selfless service in the cause of liberty. When Publius was told, for example, that his large and stately house on the hill overlooking the Roman forum was offensive to the people, who suspected him of having despotic intentions, he immediately ordered the house pulled down, and moved into much humbler living quarters in the lower part of the city. Because of his unimpeachable character and exemplary leadership as founder of the Roman republic, James Madison, Alexander Hamilton, and John Jay adopted Publius’ name as a pseudonym when they wrote The Federalist Papers.

Several generations after the expulsion of the Tarquins, the Romans decided to codify their somewhat haphazard legal system, and appointed 10 men, the socalled decemvirs, to create a true Roman constitution, the famous Twelve Tables of Roman law. The decemvirs, however, refused to step down when the project was completed and turned themselves into a sort of self-appointed ruling tribunal, against the wishes of the Roman people and legislators.
Virtue Was Worth Defending With Your Life

The Roman republic was in danger of succumbing to this palace coup until one of the decemvirs, Appius Claudius, contracted a consuming passion for a certain young woman named Virginia who, as her name suggests, was considered the very embodiment of Roman chastity and virtue. Appius Claudius used his usurped powers to compel Virginia’s father Virginius to surrender her to him as a chattel slave. Her father, knowing what this would entail, stabbed his daughter in the Forum as a final desperate measure to protect her from Appius Claudius. Word of the event quickly circulated through Rome, and the citizenry were so outraged at the conduct of Appius Claudius that a revolt was raised and the decemvirs were ousted from power. Appius Claudius himself was arrested and died in prison.

These two events are indicative of the attitude of the early Romans toward matters of morality. Whatever their other faults, the early Romans were conspicuously jealous of the chastity of their women.

Unfortunately for Rome, this state of affairs did not persist forever. Not long after the conclusion of the Second Punic War, in about 185 BC, the Roman republic was severely endangered by a vile conspiracy that sought to corrupt utterly the morals of the Roman people and to take control of the state. This was the infamous Bacchic Cult, a secret religious society of foreign origin dedicated to the god Bacchus, the god of transgression, and described vividly by Livy. In their secret rites or bacchanalia, Livy tells us, “no sort of crime, no kind of immorality, was left unattempted. There were more obscenities between men than between men and women. Anyone refusing to submit to outrage or reluctant to commit crimes was slaughtered as a sacrificial victim. To regard nothing as forbidden was among these people the summit of religious achievement.” Furthermore, the cult “was also a source of supply of false witnesses, forged documents and wills, and perjured evidence, dealing also in poisons and wholesale murders among the devotees.”

Fortunately for Rome, a courageous consul named Spurius Postumius launched an investigation after an interview with a cult inductee. Warning the Roman people of the dangers of the Bacchic cult at an assembly, Postumius said: “Never has there been so much wickedness in this commonwealth, never wickedness affecting so many people, nor manifesting itself in so many ways. Whatever wrongdoing there has been in these years, whether in the form of lust, or fraud, or violent crime, all of it, you may be sure, has its origin in this one shrine. And they have not yet put into practice all the crimes towards which they have conspired. Their impious conspiracy still confines itself to private outrages, because it has not yet strength enough to overthrow the state. But the evil grows with every passing day, and it creeps abroad…. It aims at the supreme power of the state.” After this address, the Roman Senate broke up the Bacchic network, arresting thousands of people. Republican Rome had survived, but the damage inflicted by the Bacchic cult on Roman was more permanent.

By the mid-first century BC, little more than a century later, Rome was in complete turmoil. The historian Sallust, who had enjoyed a long and somewhat checkered career as a Roman politician before retiring to write history, paints a stark picture of Roman culture in the tumultuous years between the end of the Punic Wars and the rise of Julius Caesar:

“Avarice destroyed honor, integrity, and every other virtue, and instead taught men to be proud and cruel, to neglect religion, and to hold nothing too sacred to sell. Ambition tempted many to be false, to have one thought hidden in their hearts, another ready on their tongues…. Poverty was now looked on as a disgrace and a blameless life as a sign of ill nature…. Honor and modesty, all laws divine and human, were alike disregarded in a spirit of recklessness and intemperance…. Equally strong was their passion for fornication, guzzling, and other forms of sensuality. Men prostituted themselves like women, and women sold their chastity to every comer.” Sallust, The Conspiracy of Catiline, Penguin Books translation, 1963, pages 181-182

Wise Men on Liberty and Morality

The Founders of these United States studied history, especially Roman and Israelite history and knew how important virtue was to liberty.  These men knew that what they were doing would not, could not last if the people were not virtuous, and it is conspirators and their dupes that insist on separating morals from liberty. It was John Adams who explained,

“[I]t is religion and morality alone which can establish the principles upon which freedom can securely stand. The only foundation of a free constitution is pure virtue.” -Letter to Zabdiel Adams on June 21, 1776

We read in Moses chapter five verse 51 about carnal knowledge being a key sign and token of those involved in the Satanic conspiracy that started with Cain. And Moroni explained that we can only remain free if we will worship (obey) the Savior. (Ether 2:12)

The enemies of freedom are working to erode morality, while known defenders of liberty say liberty can’t be had without morality, and history bares out the truth. Let us defend virtue in all its forms as if it were our very lives.