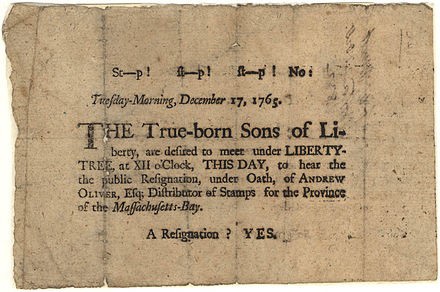 In November of 1765, Parliament enacted the Stamp Act, a direct tax requiring many printed materials to be printed on paper produced in England. The fact that Parliament would take such actions affecting virtually every part of life in Colonial America enraged the colonists. Objecting to the notion that Parliament was supreme and could impose whatever binding legislation it wished upon the colonies, the colonies instead adopted the rigid stance that colonists could only be taxed by their local assemblies. This idea, they said, stretched all the way back to 1215 and the Magna Carta.

To help build support for nullification among the people, a group called the “Loyal Nine,” led by Samuel Adams, gathered a group of supporters to burn an effigy of Andrew Oliver, the person charged with enforcement of the Stamp Act, which led to his removal from office.

These bold acts by a few dedicated individuals forced the everyday colonists to make a choice. Since obtaining material with the stamp was impossible, one could choose to go on living his life as if the act didn’t exist, or stop all business so as not to disobey the “law”.

Most, to the surprise of the British loyalists, chose to defy the illegal act of Parliament.

Today, people claim that Congress has virtually unlimited authority due to the commerce, general welfare, and supremacy clauses. During this time, loyalists claimed Parliament was supreme and could impose anything they wanted onto the colonies. These loyalists defended the idea that the colonists were represented because the merchants interested in colonial trade were represented as a class in the House of Commons. However, when the colonists proclaimed, “no taxation without representation,” they meant no taxes should be levied unless the legislator was accountable directly to the people being taxed. The loyalists tried to get the colonists to support reform and fought against the “anarchy” of nullification. Oppression could never be real because Parliament was subject to the “conscience of public opinion.” The Founders knew, though, that liberty was often destroyed at the hand of so called “public opinion.”

Massachusetts, Pennsylvania, and Virginia passed resolutions stating that only local assemblies that were directly accountable to the people could tax the people.

From burning private property to tar and feathering, the colonists took steps that many today would call “extreme,” but, in fact, were essential steps in enforcing the law, the Constitution, on a group of criminals masquerading as a legislative body that refused to obey the law they swore to uphold.

Inspired men like Samuel Adams understood the steps needed to restore liberty to the British subjects and used his influence, however small, to restore the liberty of the people. Remember, the “Sons of Liberty” started out as the “Loyal Nine.” If you feel like there are too few people willing to stand for liberty against would be tyrants, learn the lesson from the Founding Fathers, namely, to do what is right and help build support for the cause of freedom.