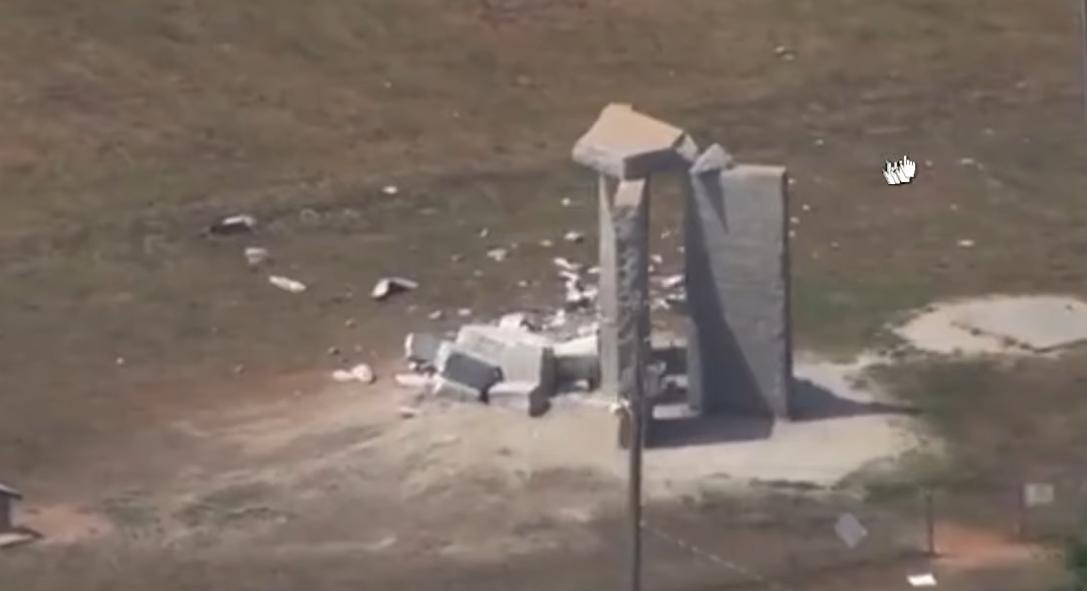 Will this be used to stir up division in the marxist tradition?

YouTuber walks through the official video releases, and possible blaming of a natural act of God on people to stir up division

The following original text taken is from the official website of the Elbert County Chamber, where the guidestones were located.

The Georgia Guidestones is probably the most unusual monument ever produced in the Elberton area. Not only is its massive size larger than any single other monument of record manufactured here, the circumstances surrounding its origin, completion, and erection have undoubtedly caused more speculation and comment than any of the other millions of granite memorials produced in Elberton since the area’s famed Granite Industry started.

How it all Began

Joe Fendley, president of Elbert Granite Finishing Company, Inc. in Elberton, Georgia was approached by a neatly dressed man who wanted to buy a monument. The middle-aged man who identified himself as Mr. Robert C. Christian said he wanted to know the cost of building a monument to the conservation of mankind and began telling Fendley what type of monument he wanted. Christian outlines the size in metric measurements. No monument of this kind had ever been quarried in Elberton, which was to explain why the price quoted could only be an estimate and not one guaranteed, as is the normal practice. Mr. Christian agreed to the quoted price. Christian, during his visit with Fendley, explained that he represented a “small group of loyal Americans who believe in God.“* He said they lived outside of Georgia and wanted to “leave a message for future generations.“* After leaving Fendley’s office, Christian went to the Granite City Bank to meet with Wyatt C. Martin. Christian informed Martin about his plans and the group he was associated with, had planned this monument for 20 years. He said the group wished to remain anonymous and revealed to Martin that his real name was not Robert Christian, it was a pseudonym chosen because of his Christian beliefs. After being sworn to secrecy, Christian told Martin his real name, and some other personal information so Martin could investigate him properly before the project began. To this day, Wyatt Martin is the only one who knows Christian’s real name. The prototype that Christian brought to Fendley resembled the infamous Stonehenge Monument in England. Pyramid Blue Granite from Pyramid Quarry was chosen for the monument. Each piece weighed approximately 28 tons, making this project to become one of the most challenging projects to be worked on in Elberton. Charlie Clamp was the sandblaster chosen to etch the “message”, which was more than 4,000 individual letters.

Christian chose Elberton, Georgia as the site for the Georgia Guidestones for several reasons. Elberton has a broad variety of granite, a mild climate, which will preserve the monument, and his great grandmother resided in Georgia. The specific site chosen was a 5-acre plot located 8 miles north of the city of Elberton on Highway 77, this was the farm of Mildred and Wayne Mullenix. This plot of land is the highest point in Elbert County and is in range of summer and winter sunrises and sunsets. Several engineers and astronomers were hired to investigate the positions, placement and astrological markings of the monument. Fendley chose Joe B. Davis, a retired granite craftsman who was widely known in the granite industry, to be responsible for the project.

Hours of operation: The monument is open during Daylight hours

Admission Fee: It is FREE to visit and enjoy the Georgia Guidestones

Facilities: There are no restroom facilities at the Guidestones. Restrooms, food, and drink are located in nearby Elberton, GA (7 miles) or Hartwell, GA (8 miles)

Fauci Admits: Vaccine Not Effective. Not a Godsend.