Gov Cox Buys a Fence to Stop You. Your Constitutional Right to Public Records.

Holding government accountable depends on your ability to successfully claim your right to assemble and petition for redress of grievances, which all depends on public accessibility of key information.

Public records can be cross referenced and used for a multitude of constitutional purposes.

This article covers one specific constitutionally based use, and is not a complete discussion on public records. 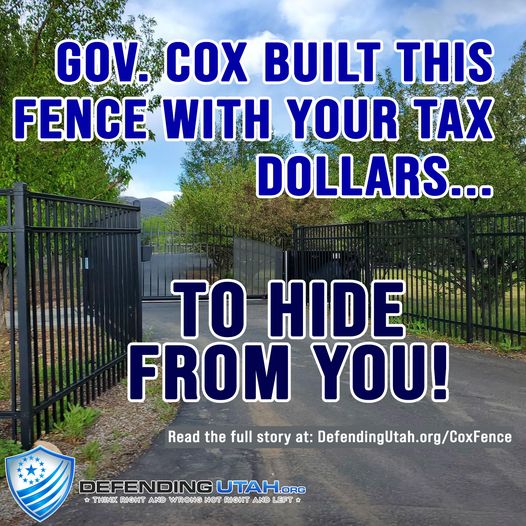 Audio reading of this article:

Why Does Certain Information Need to be Public Record?

It all comes down to our First Amendment Constitutional right to peaceably assemble and to petition the Government for a redress of our grievances. Consider in 2020 when an unorganized group of concerned citizens decided to stand on the public sidewalk outside of Utah State Epidemiologist, Angela Dunn’s home to petition her for a redress of grievances of the people that she was publicly known to be responsible for. State leaders had been allegedly deferring to her to make decisions to suspend the rights of the people to live and earn income to support their families. The people had a constitutional right to have answers to why she was justified in making the decisions she was making. This group of protestors claiming to represent the People of Utah leaked this letter to us in advance of delivering it to Dr. Angela Dunn, asking her to answer some questions that the people of Utah have for her. They say she has avoided answering these questions in all other public venues where she is supposed to be responsive to the people, thus, they took the letter to her home.

This also includes peaceably protesting outside of Governor Cox’s home in November of 2020 regarding unlawful mask mandates. As one liberty-loving, patriot mom said, “You can keep your cookies, Cox!”

So if we are allowed to petition our Government for a redress of grievances, then how do we deliver that message? We call them, email them, and as shown in the two examples above, we can take it to their homes if our petitions continue to fall on deaf ears. Many will argue a “moral” cause that it’s a “violation of privacy” to show up at someone’s house and cause them distress. Eric Moutsos reported to 2News that “Just because you can do something doesn’t mean you should do something,” he said. “I don’t advocate going to the personal homes of these representatives.”  Unfortunately, not everyone understands, if you don’t use your rights, you lose your rights. The power to peaceably assembly is the power that our Founding Fathers gave us for a reason. It works. And how do we know it works? We find a tax-payer funded security detail project and new fence for the Cox family and a visibly bothered Angela Dunn appearing on TV realizing what it means to be a state employee who endorses tyrannical behavior.


What is Considered Public Record?

The Freedom of Information Act is a federal law that releases government agency public records and makes it possible to view most public records. Utah’s Public Records Act (known as the “Government Records Access and Management Act) – Utah Code 63G-2 – briefly states: “(1) In enacting this act, the Legislature recognizes two constitutional rights: (a) the public’s right of access to information concerning the conduct of the public’s business; and (b) the right of privacy in relation to personal data gathered by governmental entities…

Some other interesting examples of public record can be found in the Utah Government Records Access and Management Act 63G-2-201.

For example, on page 21 in Part 3 of Utah Government Records Access and Management Act 63G-2-201, public record classifications are listed:

What if your Government hides from you?

You still have a right to redress, ask questions, and get answers.

But don’t be fooled by the fake legislation that has followed and will continue to follow after We The People use our rights to petition unjust actions. The Establishment hates it when we use our rights to put pressure on them. After the protest in front of Angela Dunn’s home, the Utah Legislature passed a bill to prohibit picketing outside homes. HB291 would make “targeted residential picketing” — a protest “specifically directed or focused toward a residence, or one or more occupants of the residence” — a class B misdemeanor, which is punishable under Utah law by up to six months in jail or fines of up to $1,000. It was signed into effect March 16th, 2021 but it is clearly in conflict with a basic right to “peaceably assemble and petition the Government for a redress of grievances”. Does it sound just to be arrested for peacefully standing on a public sidewalk, simply asking questions in response to your rights being trampled on? A private residential home’s front door is considered a public entry point, as much as the sidewalk itself. Public sidewalks in residential neighborhoods are still public. The proper response to such “pretend legislation” is exercising your constitutional right to #nullification.

How to Find Public Records:

Defending Utah is reader supported. If you appreciate this content and want to support more great content like this or you want to become actively involved in the fight for liberty, please consider becoming a member of Defending Utah today.

Jane Jones is Defending Utah's newest addition to the muckraker journalism team. She hopes to bring hidden things of darkness to light, and make a difference in the battle for the rights of mankind in the world.

Fauci Admits: Vaccine Not Effective. Not a Godsend.