History of the Deseret Flag / The Kingdom of God Flag

UPDATED: We’ve updated this article to include a fuller history of the flag.

Defending Utah is proud to announce the availability of the Deseret Flag in our liberty store.

Over the years we’ve tried to acquire these many times, and there was rarely an easy place to order them from. And it was usually custom ordered with an extremely steep price for that custom order.  To help solve this problem for others who also appreciate the historical message of a flag that represents spreading liberty to the entire world, we’re now offering these flags directly on our store shipped from right here in Utah!

This is a full sized, 3 feet by 5 feet flag, with two metal grommets.

This flag is the most commonly accepted/used flag to represent the nation-state of Deseret that existed in North America before the United States came to what is now the western United States. It is also known as the Kingdom of God flag.

This flag is an historical symbol that reminds the world of the vision of Joseph Smith Jr. He deeply hoped for the existence of a world where the rights of all mankind, regardless of their religious beliefs, could live where they had the freedom to live and worship according to the dictates of their own conscience, and where the principles of freedom as outlined in the US Constitution would remain supreme.

The Lesser-known History of the Flag

Deseret Flag / The Flag of the Kingdom of God

The “Kingdom of God” in Mormon thought and practice during the nineteenth century exceeded the confines of religion alone. The Kingdom of God was regarded by Joseph Smith, Brigham Young and John Taylor, presidents of the Church, as more than the ecclesiastical church. The Kingdom of God
was at once millenarian and contemporary, spiritual and temporal. One characteristic which has been overlooked in scholarly analyses of the Council of Fifty and Mormon Kingdom of God is the existence of an external symbol of that political kingdom– a banner or flag.

Joseph Smith suggested the possibility of creating an ensign for the kingdom of god as early as 22 June 1844: “I also gave orders that a standard be prepared for the nations.” According to LDS church historian George A. Smith, Joseph Smith’s concept for an ensign was amplified in a vision Brigham young had after the Prophet’s death.

While they were fasting and praying daily on the subject [the migration west] President Young had a vision of Joseph Smith, who showed him the mountain that we now call Ensign Peak, immediately north of Salt Lake City and there was an ensign fell upon that peak, and Joseph said, “Build under the point where the colors fall and you will prosper and have peace.

Although George A Smith’s account was separated from the occurrence by more than twenty years, John D. Lee recorded in his diary a sermon given by Brigham Young on 13 January 1846, in which there are more details about this flag:

Pres B Young said that the saying of the prophets would never be verified unless the House of the Lord be reared in the Tops of the Mountains & the Proud Banner of Liberty wave over the valleys that are within the Mountains & I know where the spot is & I know how to make this flag. Jos sent the colours and Said where the colours settled there would be the spot.

Therefore, even prior to the departure of the Saints from Nauvoo, Illinois, Brigham Young contemplated making a special flag for the mountain haven of the saints

By the time Brigham Young led the first pioneer company toward the great basin in the spring of 1847 he had aligned this flag with the political kingdom of god on 29 may 1847 president young preached a sermon on this subject to the pioneer company.

President Young then spoke of those who was not in the Church– as there were some present– that they would be protected in their rights but they must not introduce wicked men in the camp for it would not be suffered. He then spoke of the standard and ensign that would be reared in Zion to govern the Kingdom of God and the nations of the earth. For every nation would bow the knee and every tongue confess that JESUS was the Christ and this will be the standard: The Kingdom of God and his Laws and Judgment in—— [a shorthand entry which completes the full name of the Council of Fifty: The Kingdom of God and His Laws with the Keys and Powers thereof and Judgment in the Hands of His Servants]. And on the standard would be a flag of every nation under heaven.

On 26 July 1847, Brigham Young, Heber C Kimball, Wilford Woodruff, George A. Smith, Willard Richards, Ezra T. Benson, Albert Carrington, and William Clayton ascended a peak at the north end of the Salt Lake Valley which they named Ensign Peak. Many later commentators on this incident have asserted that these men raised the flag of the United States on the peak at this time. Historian Brigham H. Roberts dismissed that assertion as fiction in his official history of the LDS church. However a flag of the United States was actually raised in the Salt Lake Valley sometime in 1847, but not on Ensign Peak. Erastus Snow clarified the matter by stating, “In 1847 the standard of the American nation was planted on this temple block. I assisted in planting it…” Despite authoritative denials of the Ensign Peak story, the tradition of the American flag on Ensign Peak persisted, and on 26 July 1934, a monument was erected there commemorating the alleged raising of Old Glory.

Debunking the myth of the flag on Ensign Peak leaves us with a question concerning the naming of the peak. If no US flag was raised, could a flag of the Kingdom of God (or anything representing it) have been raised on that prominence on the day it was named by Brigham Young and the exploring party? The earlier vision of Brigham Young concerning the peak included a flag of some kind, and B. H. Roberts indicated that the significance of Ensign Peak concerned the political Kingdom of God, rather than loyalty to the united states.

“The Ensign” that these Latter-day Saint Pioneers had in mind, and of which they had frequently spoke en route, was something larger and greater than any national flag whatsoever; and what it was meant to represent was greater than any earthly kingdom’s interest, and I speak not slightingly of earthly kingdoms either; but this “Ensign” in the minds of the “Mormon” pioneers concerned not one nation, but all nations; not one epoch or age, but all epochs and all ages; not nationality but humanity, is its scope and concern. It was the sign and ensign of the Empire of Christ; it was a prophecy of the time to come when the kingdom of this world would become “the Kingdom of our Lord, and of his Christ; and he shall reign forever and forever.”

The details of that occurrence are not presently extant, but it is very possible that after July 1847, a flag of the Kingdom of God was raised on Ensign Peak. This seems to be the implication of the familiar Mormon hymn, “High on the Mountain Top,” written on 19 February 1853, by Joel Hills Johnson. Johnson’s reference to a flag of the Kingdom of God is implied in the first lines of the hymn:  “High on a mountain top a banner is unfurled. Ye nations now look up it waves to all the world.” That a flag of the Kingdom of God had been raised in Salt Lake City by 1853 is also implied by Brigham Young’s comment during the same year about reports that the saints “had hoisted the flag of our independence”.

Twenty years later, another non-Mormon, Don Maguire, observed the flag of the kingdom in public display during the funeral of Brigham Young in 1877. Maguire not only described the flag in his personal journal but also associated this flag with ensign peak:

Kindly note, gentle reader, that Utah history states that the flag known as the Stars and Stripes was placed on Ensign Peak about the twenty ninth [sic] day of July 1847. The so-called flag of the Stars and Stripes placed there on that occasion was a flag having in its upper left hand corner a blue field with a circle of twelve stars and in the center a large white star. The stripes on that flag, instead of being red and white stripes, were blue and white stripes and it was to be the flag denoting Mormon sovereignty over an
area that they had now taken possession of… for good
and sufficient reasons the so-called flag of Stars and Stripes
raised on Ensign Peak above Salt Lake City in July 1847, was never again seen in public until the day of Brigham Young’s funeral when it hung from a second story window of Heber C. Kimball’s residence. That flag was exposed to public view on that morning September 1877 and it may be supposed that between the hours of eleven 0’clock and two 0’clock of the same day it was carefully folded and laid away in the redwood casket containing the mortal remains of Brigham Young there to rest with him unto the morning of the resurrection.

Wilford Woodruff’s version of the flag of the kingdom may have been  imaginative, but Maguire described a tangible reality. The colors of the flag of the Kingdom were blue and white. These were the colors of the flags used in the Iowa settlements of the saints to announce meetings: the white flag for the entire camp and the blue flag for captains of companies (most of whom were members of the Council of Fifty). The stars in the blue field suggest a symbolism consistent with the theory of the Kingdom of God: the twelve tribes of Israel (or possibly the twelve apostles) surrounding Christ as King of the Kingdom of God. Maguire did not indicate how many stripes were in the flag but in view of the prominence of the number twelve in Mormonism, [some] artist’s conception of the flag…shows only twelve stripes.

Other artists pay homage to the original 13 colonies of the United States and display 13 stripes. Considering the Kingdom of God was a political entity, paying tribute to the inspired Founding Fathers and the divinely given Constitution, it seems reasonable that there were actually 13 stripes on the flag.

Download the full original BYU article here: THE FLAG OF THE KINGDOM OF GOD 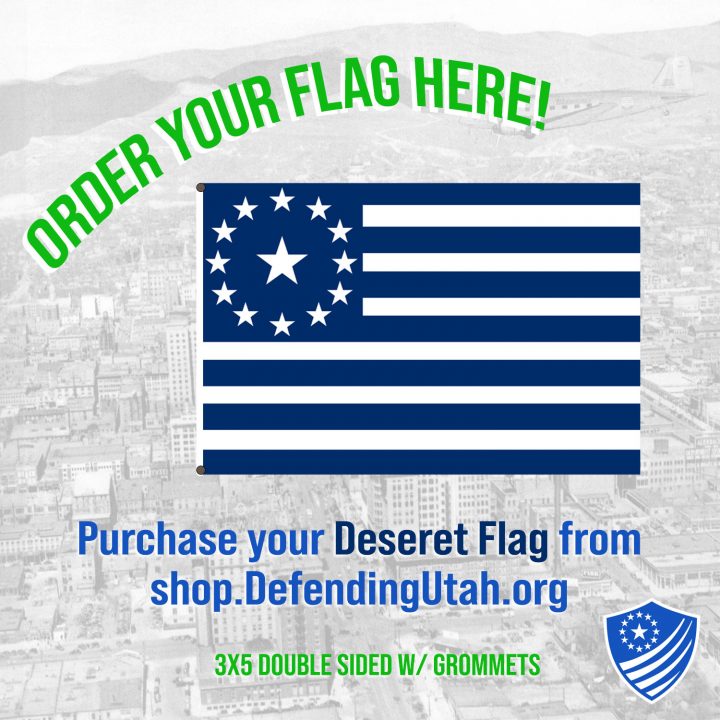