As we’re trying to get ahead of what’s coming next year with digital tyranny, we’ve been taking a closer look at some old bills from recent past legislative sessions. We felt a deep review of this 2021 bill was critical for the public to understand better.


Everyone needs to know that Senator Daniel Thatcher and Representative Travis Seegmiller destroyed your 4th amendment right to privacy. Thatcher is still around, but Seegmiller resigned from office this year (2022).

This bill gives the government a clear path to violate your constitutionally protected, natural right to privacy by making yet another legal (illegal – ‘pretend legislation‘) path to completely bypass the requirement to get a warrant to invade your personal life and make law enforcement feel justified in using this tech.  This bill is a key step for Utah in making you as a citizen NOT “secure in your person”.

This conflict of law, when the legislative law is in violation of constitutional restrictions on government, was called pretend legislation by the founding fathers and nullification is an appropriate mechanism the people may use to enforce the highest law of the land.

Let’s review what your rights are, see what the internet has to say about this bill, and then walk you through exactly what they’ve really done.

Your right to privacy reads in our constitutions as follows:

The right of the people to be secure in their persons, houses, papers, and effects, against unreasonable searches and seizures, shall not be violated, and no Warrants shall issue, but upon probable cause, supported by Oath or affirmation, and particularly describing the place to be searched, and the persons or things to be seized.
– US Constitution, 4th Amendment

The right of the people to be secure in their persons, houses, papers and effects against unreasonable searches and seizures shall not be violated; and no warrant shall issue but upon probable cause supported by oath or affirmation, particularly describing the place to be searched, and the person or thing to be seized.
– Utah Constitution, Article 1, Section 14

With the state and federal language to limit government power being nearly identical, there’s no excuse for lawmakers to behave the way they’re behaving. If lawmakers want to know if they’re allowed to write laws that permit collecting information about us without a warrant, there is nothing an intelligent person can possibly do other than see an absolute NO.  Yet, it sailed through unanimously in the house and almost unanimously in the senate at every stage of the voting.

WAS IT A GOOD THING?

Some incorrectly hailed SB34 as an attempt to limit government power.  But like we’ve shown countless times since Defending Utah started in 2013, when you read the bills carefully and follow the logic, you see the reality and learn that lawmakers rarely do anything good for the people these days.

Socialist Canada’s House of Commons – Report of the Standing Committee on Access to Information, Privacy and Ethics – praised the bill as a showing of “best practices in other jurisdictions” because it “requires government entities to notify individuals whenever they are capturing images that could be used in conjunction with FRT” (FRT – Facial Recognition Technology) View PDF Report Here


A law firm called LOEB & LOEB wrote an article where they listed legislative efforts to protect privacy. They state “S.B. 34 would limit the circumstances in which government entities may use image databases for facial recognition”.  This might be technically accurate out of context, but I contend they should not have included this law in a section on protecting privacy as they have failed to  understand the constitutional view of the law.

The National Immigration Law Center took it as an improvement for privacy when they said, “States also took steps to limit the sharing of biometric data this year. Utah’s governor signed SB 34″.

An internet search would continue to reveal countless positive reviews.

IT WAS NOT A GOOD THING – BREAKING DOWN THE LAW

Let’s get this straight. Government should NEVER use facial recognition technology on the general public because it requires them to maintain information that they have no right to keep track of. The constitutional protections on privacy and the detailed requirements to obtain a warrant leave no possible mechanisms where government could lawfully collect all the biometric data in advance without making you INSECURE in your PERSONS, PAPERS and EFFECTS.

The next sentence is how the law SHOULD have just ended…

But we’re not so lucky…

Those last two points are what I would call a failed attempt to make it seem as if the law is protecting our rights.  As if a written request to Utah’s Department of Public Safety is the same thing as a constitutionally valid warrant.

When else can they use it?

Then here’s the bottom line, where they just think they’ve done an amazing job protecting our rights:

OK Utahns….   this is the biggest joke ever.

Are you going to read the fine print every time you walk by a government security camera or walk through an airport scanner?

Are you going to choose not to get a drivers license when they say that if you don’t check the “I-Agree” box, then you don’t get to drive?

How many different ways can they gather your facial image data and say “it’s your fault, we told you we were doing it”?

The bill authorizes these uses for government facial recognition use:
1. Police, by written request explaining probably cause to a specific alleged crime, for certain types of crimes
2. For drivers licenses and id cards. (That means everyone is going to get put in to this database for sure)

If the government has a database of everyone’s pictures and private “biometric facial data” – that means they have to collect this private data first… on every single person. Where’s the warrant?

The bill makes it sound legal by saying: “oh don’t worry, we have to tell you”.  It doesn’t even give you the option that after they tell you, you must give consent, or that you have the right to opt-out.

So in all of this… at what point did somebody get a warrant? The whole process circumvents getting a warrant. Cops giving a “written request” to a bureaucrat is not a warrant. And consenting in some fine print when we get a drivers license, or a school photo, or wherever, does not constitute a warrant.

The constitutions allow for a lawful warrant to violate the security of a person only if ALL these requirements are met:
– “probable cause” supported by “oath or affirmation”
– Specific description of what is to be searched
– Specific detail of the thing to be seized (if any)
– Judge must hear these things and agree and issue the warrant
– It all must be done BEFORE the search can happen.
– The evidence must be thrown out, if a search is done without a warrant.

– A cop’s statement of probable cause in their “written request” is not specific, and it is not done under “oath or affirmation” to a judge. It is not a warrant.
– A cop’s “written request” cannot possibly identify/name the specific person to be searched because they have not even identified the person yet.
– When the government gets your photograph and it’s added to their database, they have “seized” your private biometric data without a warrant.  At what point did anyone in the government tell a judge (or even anyone) they were going to seize that data?
– When you go to get your drivers license photo, will we be given the option to demand a warrant before their computers scan the curves and shadows of our faces to save the biometric data?
– The photo is being taken without a warrant for a possible future crime. You’re being treated as if you’re already guilty. They do not have probable cause to save your private biometric data in the first place.

Every Utahn in the database has been treated as guilty until proven innocent.

– And lastly, for the drivers license situation, there’s not even a weak attempt to establish a lawful reason to gather this data. The law just blatantly gives the executive branch permission to violate your privacy, no sugar coating it.

If you judge legislator worthiness by this bill alone, then you have to fire every single legislator in the house of representatives and all but two senators for being either evil or too dumb to understand how to protect your rights. Or perhaps they are too lazy to actually read a bill that should have alarmed them with the title including “Facial Recognition”.

Can a city or county really override a state statute?


If you find a state legislator, willing to repent and fix this, you must see to it that your legislator knows they must update this law in the next legislative session to simply state one short idea: A government entity may not use a facial recognition system on an image database… EVER. Serious criminal consequence if any government entity is caught doing so.

Become a member of Defending Utah, and help support this work and learn how to take action in our regular training meetings. 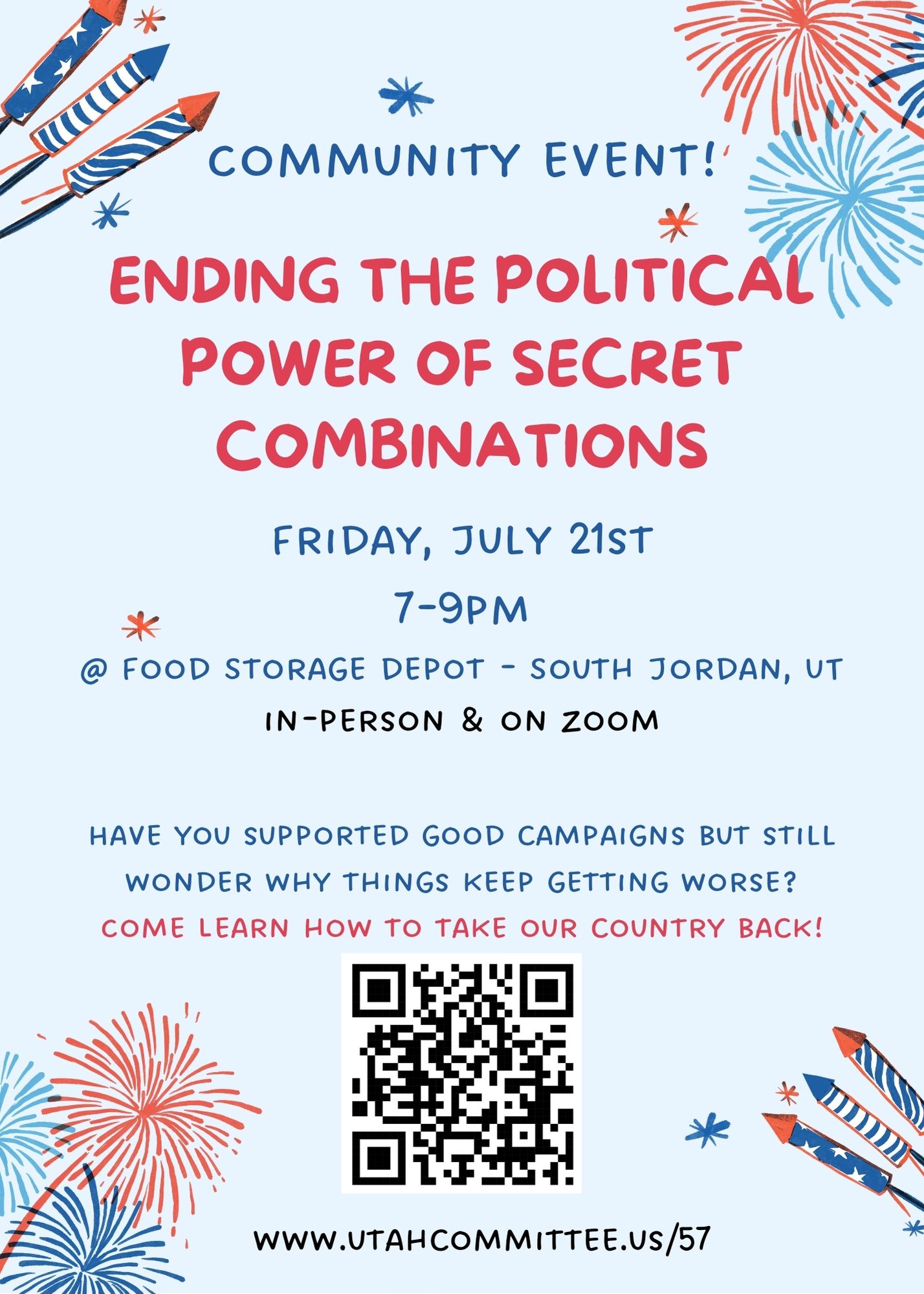