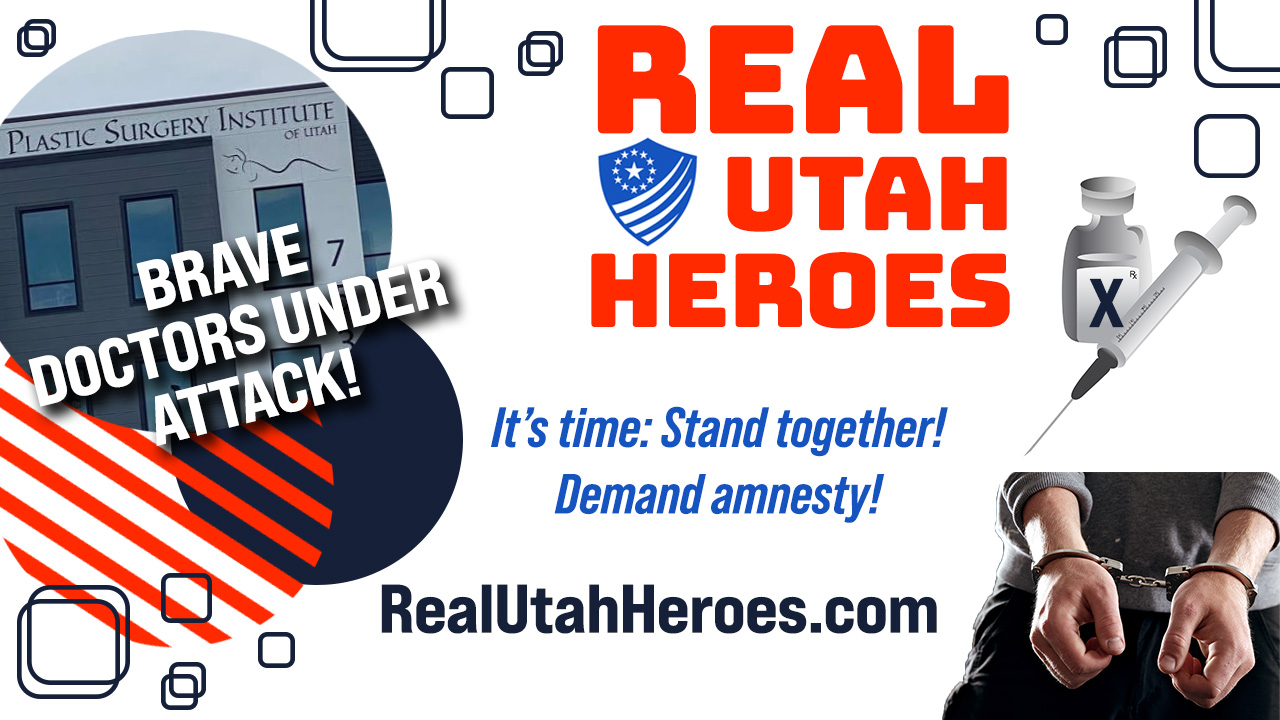 Did doctors destroy COVID shots to protect the innocent?

We Need Everyone! Please note the action items at the bottom of this article.
(You can skip ahead to www.RealUtahHeroes.com if you want to get right to the action items)

ABC4 Reported “The defendants are scheduled for their initial appearance in court on Jan. 26 at 2 p.m.” We only have a short time to act before that date. We’ll also want to keep the pressure on even after that date.

Local Utah heroes have saved thousands of children and adults from a sentence of heart disease and even death, while mainstream media has gone wild in a few shorts days declaring these local heroes to be a threat to the public. In the fake-pandemic environment where everyone was being forced through fraud, deceit, confusion and fear to inject poison into their bodies, at the threat of their lives, freedom and ability to provide for their families, the allegations say that Utah individuals and parents could come to them if they had a referral from someone else and receive papers that they received a shot without having to actually receive a shot, and now they had their “papers”. Just like Jews in Nazi Germany getting fake papers so they could move about freely without being labeled a Jew.  Their actions were as noble and honorable as the World War 2 actions of Helmuth Hübener or Nicholas Winton.

Ironically, as the the federal government has indicted them on various charges, the reality is that there is nothing more lawful, more brave or more moral than for a medical professional to risk his own safety and security in order to honor his Hippocratic oath to do no harm to his patients.

While they have arguably earned eternal rewards for their defense of children, an earthly movement has begun declaring amnesty for the four heroes with a Declaration of Amnesty for Heroes at Plastic Surgery Institute of Utah by The People of Utah

A sampling of mainstream reports are as follows. These articles tell the main stream media perspective. I will reference them only for you to see, no need to retell them here.

Straight to the source: The full indictment by a federal grand jury was released on the KSL news website and can be read here.

You should read the indictment if you’re interested in the exact details, but some highlights from the details include:

One of the most egregious mentions in the indictment is that one of those thousands who requested their services turned on them. Imagine if your family was hiding Jews from the Nazis in WWII and someone in your own family turned you in to the Gestapo. That’s what happened here.

UPDATE: In response to questions people have had, Defending Utah is emphasizing the following after our own investigation.
1. The allegations in the indictment that the defendants took money for their own benefit in any way is false. Money was never “required” as is alleged, an optional donation was suggested that most people did.
2. None of the modest “$50 donations” were ever received by the defendants.  The defendants actually lost money as they used their resource to meet the patients requests.
3. All patients requested and consented to this service, there was full informed consent for all adults and parents involved. Nobody was “tricked” into getting saline when they actually wanted the toxic mRNA. People who really wanted the shot would have gone for services elsewhere.


When an individual is faced with a criminal threat, that individual has a right to defend himself.  Everyone commonly acknowledges the right to self defense.  It is only in this situation that force is justified.  Force can only be used in self defense when your life, liberty and property is threatened by somebody else’s unjust use of force.

Likewise when a population is faced with a criminal threat, that population has a right to defend itself, working together. Fraud is a form of force. When life threatening fraud is already being perpetrated, it is not fraud to strategically defend people’s lives from such a criminal threat.

Additionally, medical doctors take a Hippocratic oath to do no harm to their patients, and as such an oath is a contract with all patients and with their God who they take their oath under, it is of higher jurisdiction than any government.

If you need to understand more on this, Defending Utah made the following documentary for you. Disobeying the government, even from the most religious perspective, is sometimes the appropriate and lawful remedy.  Refusing to acknowledge illegal laws is an act of upholding the law (the constitutions).

If you don’t need that, then please keep reading until the action items at the bottom.


Though the founders did not deal with a medical tyranny, they did strategize to carefully destroy private property when they dumped tea in the harbor. That property was used as part of a war on the colonists and the colonists were defending themselves from their own tyranny problems. This ship was using government power to monopolize the tea market.

EXPLOSION OF PUBLIC SUPPORT ONLINE IN A SHORT TIME

People naturally, and intuitively, acknowledge these Utah heroes were in the right. This is why the founding fathers enshrined the right of jury trial in our constitution and bill of rights.  Because they acknowledged that the common-sense of a jury of our peers could often see through corrupt lawmakers and over zealous prosecutors. The jury’s power to acquit (nullify), even when the law was technically broken, is one of the greatest hallmarks of our liberty. Nullification is a right of all branches of governments upon the others, and the right of the people against unconstitutional laws at all times.

YOU CAN TAKE ACTION TO DEFEND THESE HEROES


When the people can commonly see that the government itself is breaking the law that they are required to follow in so many ways, we must always look to our political foundations to see what tools we have forgotten are available for the lawful use of “we the people”.

The Utah Constitution states “Frequent recurrence to fundamental principles is essential to the security of individual rights” (Art 1 Sec 27). This statement in our constitution is open ended and abstract in favor of the people over the government. It was written into law that we have a fundamental right to consider just and true principles that override governmental authority.

The Utah Constitution states “All political power is inherent in the people; and all free governments are founded on their authority for their equal protection and benefit, and they have the right to alter or reform their government as the public welfare may require” (Art 1 Sec 2).

As our safety is threatened and the public welfare requires it, we have the right enumerated in the constitution to band together and declare these actions against these heroes to be an unlawful attack against all of the people of Utah collectively.

2. Share this report on “The story of Utah’s greatest heroes in recent times”

3. Read the Declaration of Amnesty for Heroes at Plastic Surgery Institute of Utah, Inc. by The People of Utah and sign the petition to add your personal ratification to the declaration here. As the founding fathers signed their lives, fortunes and sacred honors in defense of truth, we can now all follow in their footsteps in a small- but impactful – way.
(www.RealUtahHeroes.com)

4. Are you a leader? Consult with your business, association, church, city, organization, county, etc. and decide to sign on behalf of your entire organization. Contact the Utah Central Committee or Defending Utah to declare that your organization will ratify this declaration. A list of ratifying organizations will be published to show that the people are behind Utah’s heroes.

5. Download a copy of the declaration in PDF form and distribute it everywhere you can.  Share it with neighbors, post it in your business or church where you have permission, post it publicly as a service to inform the public on street corners, bulletin boards, telephone poles, etc.

6. Ask your sheriff or elected officials at any level to ratify this declaration — let’s find out where politicians truly stand.

7. Contact the following offices to share your opinions with them, as you see appropriate, regarding this declaration. You may want to respectfully but firmly insist that they comply with the declaration of amnesty and withdraw all charges. The doctor’s actions were self defense in nature on behalf of all of us, and their prosecution is attacking our right to self defense as a people.

Join with Defending Utah and become part of our team to expand our efforts.

Register with the UCC for text alerts and calls to action in helping defend your neighbor’s rights.