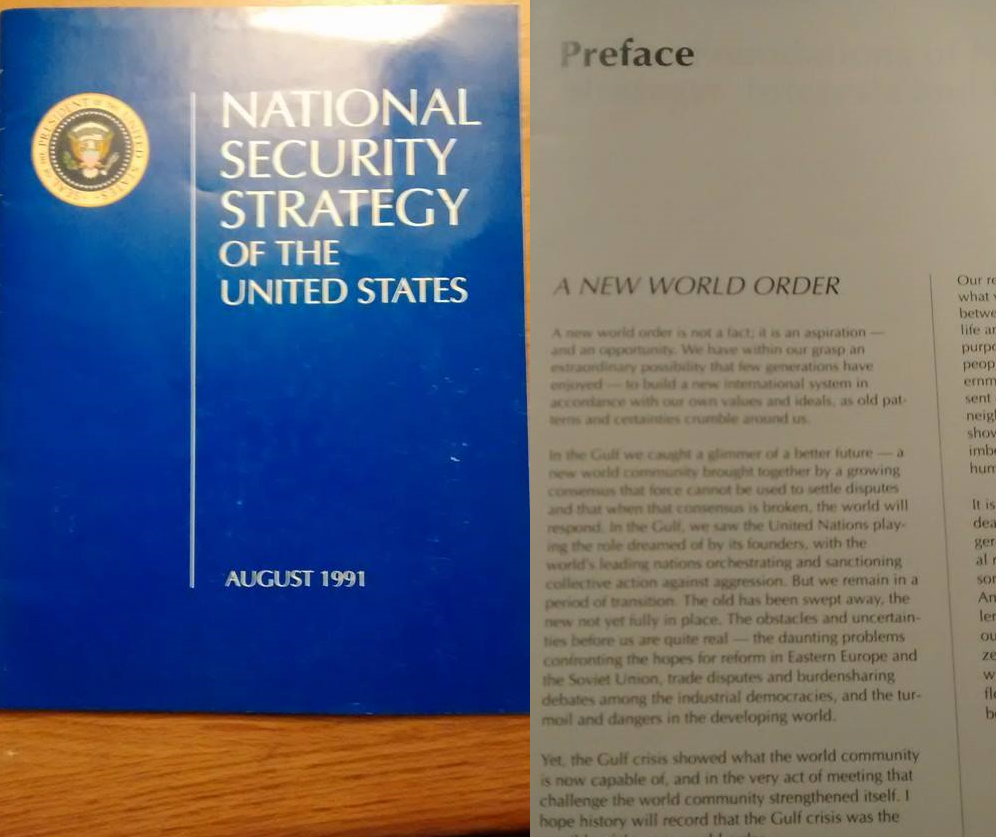 In 1991, George Bush Sr. began publicly making his presidency about the New World Order.  He spoke about it with pride for years.

The office of the President of the United States published the booklet “National Security Strategy of the United States” in August of 1991 which opened by declaring Bush’s official policy of building a New World Order through the United Nations.  That policy has never been repealed.

To the right is a picture of our copy of that official White House booklet.


Here is a quick high level infographic to explain what this article says:

And an update with Jon Huntsman’s history

The Bilderberg meeting is an annual meeting of the world’s elite.  They have an official website where they list their current year attendees and Jon Huntsman Jr. attended during the year he ran for president (2012).  This is a common paractice during the presidential season, because this is the meeting where these elite discuss who they will support for president, and considering the combined power and net worth of those attending this meeting that pretty much decides who will be president.

UPDATE NOTE: The site used to have Huntsman listed in 2012, but this link has since been taken down: http://www.bilderbergmeetings.org/participants2012.html, however the internet’s WayBack machine has captured this historical link here.

On February 16th, 2015 an article in the Deseret News confirmed Jon Huntsman Jr.’s connection to the Atlantic Council.

The article states “Huntsman is working with a number of groups, including the Atlantic Council…”

What is the Atlantic Council?

Well, according to the article it’s simply “… a nonpartisan foreign policy think tank”.

This is the friendly and neutral sounding description that the New World Order uses to describe many of their global government secret combination membership clubs.

The most well known of these “nonpartisan foreign policy think tanks” (shadow government) entities is the Council on Foreign Relations (CFR).  If you are familiar with the CFR then you know what the Atlantic Council is about.

If you are not familiar with the CFR, please read this article in the New American magazine for an introductory overview.  It explains who the “Architects of a New World Order” are with some great historical and present-day context.  Jon Huntsman is also a former member of the CFR.

Members of these think tanks have been working to influence Utah for a very long time.  In 1992 during the BYU commencement ceremony, Brent Scowcroft, a member of the Council on Foreign Relations and adviser to Bush Sr., visited Brigham Young University and told students to “Take advantage of the opportunity to shape the new world order” and that it will require “sacrifice”.

One blogger wrote of his experience witnessing this event:

When Brent Scowcroft spoke for the commencement exercises at BYU, he focused his comments on the need for the U.S. to play a central role in shaping the New World Order, mentioning this euphemism for one-world socialist government fourteen times in the course of his address. He began his address by comparing the graduation of students to the graduation of the world from an old world order to a new order. He later said, “A New World Order will appear. The issue is not whether or not there will be a New World Order, but whether the nature of that order will be shaped by the constructive involvement of the U.S.”

What he promoted, the shaping of this New World Order, is the antithesis of the principles of free government which were embodied in the Constitution when it came from the pens of the Founding Fathers. It is wholly incompatible with and inimical to the freedom for which our forefathers fought.

Here is Brent Scrowcroft, speaking at a separate occasion on the same subject:
https://www.youtube.com/embed/8SvF3UpY4NY

So today, we should be aware that both Brent Scowcroft and Jon Huntsman Jr. are members of the Atlantic Council (among other clubs) and their actions should always be looked at in the light of the stated goals of the organizations they freely choose to be a part of.

Deseret News – Scowcroft Says Now is the Time To Help The World (AT BYU)
http://www.deseretnews.com/article/223092/SCOWCROFT-SAYS-NOW-IS-TIME-TO-HELP-SHAPE-WORLD.html?pg=all

Also published official list of attendees
(Note, Defending Utah does not endorse InfoWars, but sometimes they have useful information like this)
http://www.infowars.com/bilderberg-2012-the-official-list-of-participants/