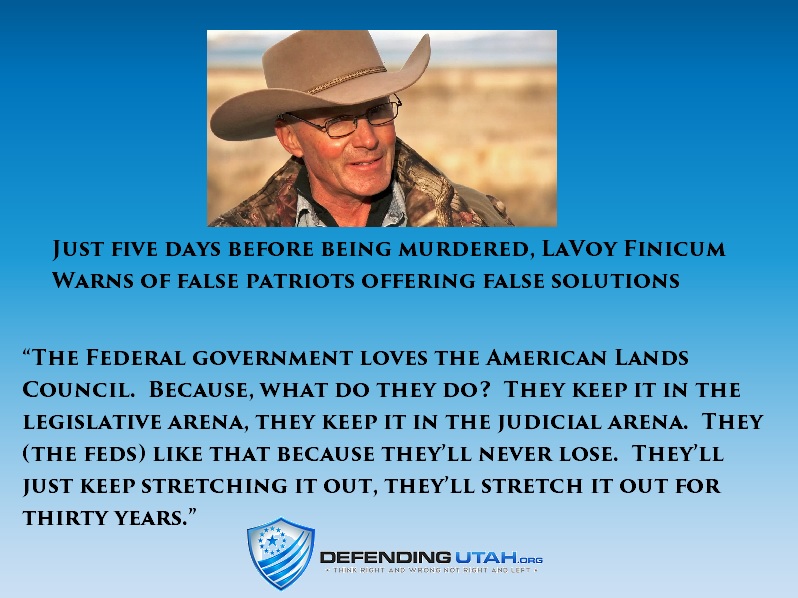 (Song performed by the daughters of LaVoy Finicum)

Just five days before LaVoy Finicum was gunned down by state and federal agents, he warned of wolves in sheep’s clothing, saying,

The Federal government loves the American Lands Council. Because, what do they do?  They keep it in the legislative arena, they keep it in the judicial arena.  They (the feds) like that because they’ll never lose.  They’ll just keep stretching it out, they’ll stretch it out for thirty years.

Mr. Finicum really gets to the core of why Defending Utah has been so adamant about opposing Utah’s Transfer of Public Lands Act.  Since the federal government literally has no authority over the land in question, Defending Utah supports local control of the land. Our opposition to Utah’s “Transfer of Public Lands Act” stems from the bait and switch being brought on us by Representative Ken Ivory’s bureaucratic shell game which is being sold to us as one thing but giving us another.

You can read our reports on this “shell game” here

Lovers of liberty must understand what it is that representative Ivory is actually doing so as not to be fooled into thinking that by supporting Ivory they are helping to further LaVoy’s work.

Some major points on what Ivory’s bills and associated bureaucratic rules are doing:

• Increase funding to a government agency whose job it is to buy development rights from property owners to keep it off-limits. (Report on Utah’s Transfer of Public Lands Act, Constitutional Defense Council , pg 68)

• Over $12 MILLION in Tax Payer Dollars to Fund “Consultants”

Southern Utah ranchers gathered together to be in solidarity with ranchers throughout the west, restoring the rule of law through a petition for a redress of grievances and the signing of a letter of intent to withdraw consent to contract with the BLM.  When this happened, those with a vested interest in perpetuating the status quo (of more lawsuits, more legislation) including state Rep Mike Noel, were sent to persuade the ranchers to stay the course with the above legislative process.

Thankfully, on January 23, 2015, many ranchers refused to listen to the voices like Ken Ivory and Mike Noel, and decided to stand for principle.

LaVoy had been involved in lands rights issues for many years and knew the agenda behind the efforts of state representatives like Ken Ivory.  We can honor his memory by becoming informed and not falling for false solutions from false Patriots.

You can listen to our full interview with LaVoy Finicum here: